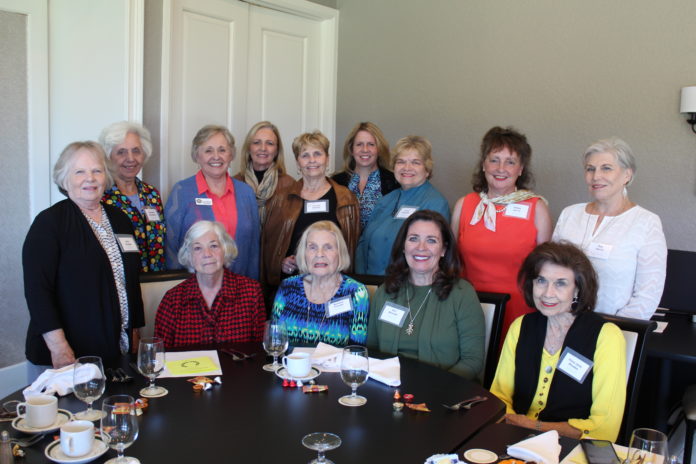 Founded in October 1913, the Mothers Club is still going strong, offering fellowship and educational programs to its members, as well as making donations to the community. The club meets September through May at the Saugahatchee Country Club with one member serving as hostess and decorating tables, while another member presents an interesting program. The members are graciously sharing their favorite recipes for autumn meals.

A few years ago, Anne Bennett Carpenter met with long time member Vivian Bryers, who had collected notes, minutes and newspaper clippings about the club over the years. Anne assembled the material for a program on the club’s history to members.

The Mothers Club is believed to be Opelika’s oldest study club.

The first meeting of the Mothers Club was called to order on Oct. 24, 1913, by the first president, Louise Andrew Westcott Samford. Mrs. Samford was born Nov. 23, 1877, and received a music degree from the college in Tuskegee, which later became Huntingdon College in Montgomery, a women’s college. College attendance by women was rare at this time.

Originally, the Mothers Club had two objectives. One was to offer programs for a better understanding and appreciation of literature, music and fine arts, as well as current state and world affairs. The club still has a program every year on current events.

The other objective was to take an active interest in civic affairs and to contribute whenever possible to worthwhile organizations for charity and medical research. While the emphasis on medical research was later dropped, the club still makes donations to organizations.

Goals of the club have changed and broadened through the years. The latest constitution revision focuses on learning about programs for children in the area, as well as new agencies and services, county, state, and national affairs and civic responsibility. The appreciation of literature, music and fine arts remain.

In the earliest constitution, the president appointed a musical director, today the song leader, and there were two vice-presidents with a membership of 24. This membership number was changed throughout the club’s history. In 1952, a motion was added for a leave of absence. On March 1970, members voted that an inactive member would become an honorary member.

The Collect or Club Prayer printed in the Mothers Club yearbook was written by Mary Stewart, a high school principal from Longmont, Co., in 1904. The prayer was offered for publication because Mary felt that “women working together with wide interest for large ends was a new thing under the sun, and perhaps they needed a special petition and meditation of their own.”

The first women’s organization to use the collect were clubs in the General Federation of Women’s Clubs (GFWC). The federation was founded in 1890 to bind women’s clubs in a national group where programs could have more effects on social causes for children and women.

The Mothers Club was a member of the GFWC from 1923-1944. Many clubs in the Opelika-Auburn area were also members of the GFWC. After 1944, the designation of being a member was no longer mentioned in the yearbook.

Often the Mothers Club emphasized one theme for the year’s programs, including studying one country, such as Italy. Members would diligently study their topic to bring the information to the club. Roll call could be answered with names of artists from Italy.

According to a news article in the Opelika paper, programs in the 1930s focused on “Twentieth Century Trends,” while the 1940s brought “America Expresses Itself.” During the 50s, club programs focuses on “Present Day Interests,” and the 60s saw an emphasis on “The Lighter Side.” During the 70s, the programs were about “Women: Yesterday and Today.”

One of the more interesting projects over the years was soliciting donations for a swimming pool for the City of Opelika and help in the pool management.

Today, the hats, gloves and fur coats are long gone. Members of the Mothers Club are still enjoying interesting programs and discussing current events, as well as fellowship over lunch. Meetings open with a roll call.

The club continues to be community minded. Last May a donation was made to Storybook Farms, and in 2016, a donation was given to the Kreher Ecology Reserve.

Look over the following recipes from members, and select several to add to your menus for the coming week.

Chicken Pecan Quiche
Ann Bennett
A slice of this quiche would be served with fresh fruit, mixed greens salad with poppy seed dressing and mini lemon poppy seed muffins for ladies’ luncheons in Kingsport, TN, where I previously lived.
Preheat oven to 350 degrees.
Whisk together:
1 cup sour cream
1/2 cup chicken broth
1/4 cup mayonnaise
3 large eggs, lightly beaten
Stir into that mixture:
2 cups finely chopped cooked chicken
1/2 cup grated sharp cheddar cheese
1/2 tsp paprika
1/4 cup minced onion
1/4 tsp. dried dill weed
3 drops hot sauce, such as Texas Pete
Pour into 9-inch deep dish frozen pie crust.
Topping:
1/2 cup chopped pecans
Sprinkle pecans evenly over top of quiche.
Bake uncovered at 350 degrees about 30 minutes; cover and bake until set to prevent top from over browning, usually 50-55 minutes.
Variation
Another method of preparing the quiche is to place a piecrust into a baking dish, and press chopped pecans onto the crust. Then add the filling. It is also good, but it is not as pretty served as a wedge slice topped with pecans.

Nanan’s Pound Cake
Nancy Burgess
This is one of my aunt’s most popular recipes. She lived in New Orleans and was married to an Italian man, who was a wonderful person. We called her Nanan.
2 sticks butter, softened
3 cups sugar, sift twice
6 eggs
3 cups all-purpose flour, sift twice
6 eggs
½ pint whipping cream
1/2 tsp. salt
1 tsp. vanilla
Cream butter and sugar until fluffy. Alternately add an egg, some flour and some whipping cream, beating well between each addition, until all is used. Add salt and vanilla.
Bake in greased and floured tube pan (10-inch) or a Bundt pan at 315 degrees for 1 hour and 15 minutes. Test with toothpick. If not done, bake 10 – 15 additional minutes.

Ratatouille
Roberta Haden Greene
6-8 crook neck yellow squash sliced large
4 green zucchini sliced
2 large yellow or white onions, peeled into rings
1 large eggplant, cut ends off and slice in rounds or large strips
2 tomatoes, peeled or unpeeled sliced
Cheeses: shredded mozzarella, sharp cheddar and Parmesan (may use other cheeses, if you prefer)
Olive oil and olive spray
I use a large 9 x 13 inch Pyrex casserole dish that makes enough for 6-8 servings.
Put eggplant in salt water for 10 minutes drain on paper towel. In a skillet brown, and sauté in olive oil until tender.
Put olive oil and spray on bottom of casserole dish. Place eggplant on bottom of dish. Start to layer above vegetables and cheeses (tomato slices do better on the top layers with the cheeses).
Cover with foil. Bake at 350 for an hour or longer, if necessary. Check at one hour. You may need to drain extra olive oil that comes from the bottom before serving. Serve with salad and bread.