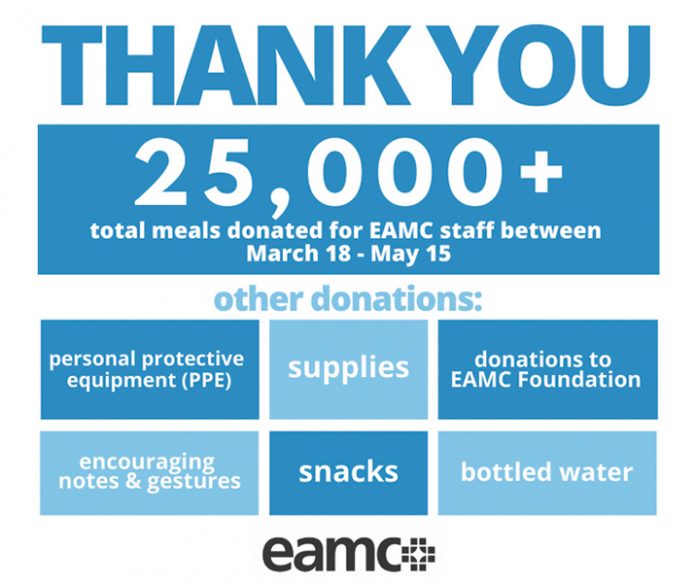 Thanks to the generosity and support of the local community as of May 29, East Alabama Medical Center has received more than 30,000 meals donated to their hospital staff from local restaurants and caterers during the peak of COVID-19. “Both the Opelika and Auburn Chambers started providing for the COVID testing centers and staff dealing with frontline exposure and it grew from there,” said EAMC Hospital Chaplain, Laura Eason.

“We knew that we wanted to take as much precaution as possible, and didn’t want our staff to be in the cafeteria or leave the hospital to go get lunch, especially those working with the COVID patients,” Eason added.

The President of the Auburn Chamber, Lolly Steiner, first reached out to EAMC wanting to provide some meals for the testing sites. “(They) knew it was off site and those people weren’t allowed to leave the area… so they wanted to help provide lunch for them, the COVID call center and the ICU staff,” said Eason.

The Auburn Chamber delivered a total of 3,495 meals from March 18 through May 1.

“It was the perfect partnership because the staff and employees were so busy (that) they were unable to get meals, so delivering meals helped them out tremendously and it helped our chamber members because we were able to pay for the meals to support our local restaurants and caterers,” said Opelika Chamber Manager of Program and Events, Mackenzie Kayler.

“Every day we coordinated lunch deliveries to the hospital at the main lobby loop… EAMC would have employees with carts that would come to the cars and pick-up the food to take inside to practice social distancing and keep people out of the hospital. It was a great community effort and we were glad to have played a part in the [30,000] meals delivered,” said Kayler.

“Originally, (we were) trying to think about handling this for two weeks, and two weeks turned into two months,” said Eason.

“Retired EAMC Physician Dr. Hagan wanted to do something for the night staff, and he organized the night shift meals,” added Eason. “It started with 100 meals, and within two days later, it grew to 300 meals… the night shift was fed for six weeks.”

During the course of those six weeks, Dr. Hagan was able to organize a total of roughly 10,000 donated meals for the night shift.

“The entire hospital staff has just been blown away with the generosity and support that Lee County has shown to all of us during this pandemic,” said Eason. “Not only the meals, but the words of encouragement, park and pray, the painted bricks, banners, snacks, prayers, treats, lights, and especially all the PPE (masks, gowns, gloves, face shields and hand sanitizer). It’s just been amazing and has really helped encourage us and keep us going,” added Eason.