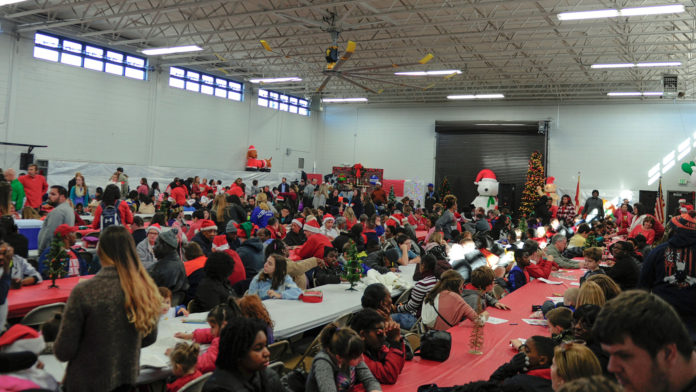 Nearly 24 years ago, Harold Watts made the more than two-hour trek from Opelika to Gadsden to attend the city’s annual Special Needs Christmas Party that has been in existence since 1952.
Funded by Local 12 of the United Steelworkers Union, their event is staged each year by the Etowah County Board of Education, and brings in hundreds of special education students from the area.
Recognizing the need for a similar event in Lee County, Watts decided to use his platform as member of the United Rubber Workers tied to the Uniroyal/Goodrich Plant and helped organize Lee County’s first “Special Needs Christmas Party” in 1997.
“What was important back then when we first started and is still important today is to give back to the community and hopefully make it a better place. That’s the gist of how and why Harold decided to help start this,” said longtime volunteer and fellow retiree Paschal Prickett, who worked at the plant for more than 46 years.
The party through the years
The inaugural party was held in Smiths Station before being moved to Opelika, where it has remained since. Venues have varied, but Opelika’s Alabama National Guard Armory and SportsPlex have served as the most recent venues for the event.
Prickett has been involved with the party each year since its inception, but took an expanded role in helping organize the event 2009 after the plant shut down.
Facing the possibility of lacking the funding to stage the event that year, Prickett said longtime personal friend and former Alabama football star Steadman Shealy of the Shealy, Crum & Pike Law Firm in Dothan intervened and helped provide crucial aid through a lean five-year stretch until 2014, when more local donors and partners joined the cause.
While some businesses, individuals and organizations donate monetarily, others donate their services, with examples Cameragraphics offering free portraits with Santa and Mrs. Clause and Bi-City Produce and Givorns Foods donating fruit to give out to event attendees.
Following are other major donors past and present that Prickett and fellow volunteer Beth Welcher acknowledged: