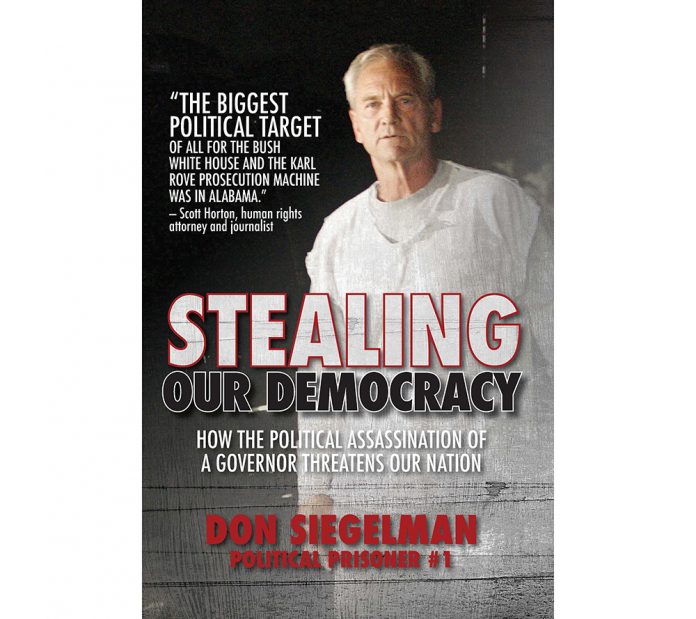 In a searing political memoir, former Alabama Governor Don Siegelman explodes the myth of an impartial U.S. justice system. He should know.

Arguably the most successful and promising politician in modern Alabama history, his three-decade career in public service ran afoul of Republican opponents who used the federal judicial system to take him out of contention in Alabama and nationally. Siegelman was sentenced to 88 months in federal prison and served five years. With long stretches in solitary confinement, he was a literal political prisoner, cut off from media interviews and outside contact.

Stealing Our Democracy reveals how Siegelman’s political enemies — including politicized prosecutors and a corrupt judge — stripped him of his freedom and his career, and more importantly brought an era of progressive Democratic populism to an end. His is an intensely personal account of how our system can fail and be abused for political greed.

And if it could happen to him, he writes, it can happen to any of us, particularly in an era when Donald Trump regularly uses the Department of Justice as a political weapon to defend himself and abuses his power to destroy those who oppose him. Siegelman draws on his experience as a public servant and an inmate to show why the nation’s criminal justice system must be reformed along with our system of indictment, prosecution and sentencing. Finally, Stealing Our Democracy offers a blueprint for change for voters in 2020.

Don Siegelman is the only politician in Alabama history to hold all the state’s top constitutional offices: governor, lieutenant governor, attorney general and secretary of

state. Alabama’s first Catholic governor and the first “New South” progressive governor in the state’s post-civil rights era, and a staunch Democrat, Siegelman was a potential 2004 presidential candidate. His politics put him in the crosshairs of insurgent Republicans, both within the state and nationally. He narrowly lost a bid for reelection in 2002 when the vote total changed overnight after the polls had closed in a Republican-controlled county.

However, Siegelman remained widely popular in Alabama and was given good odds of regaining the governor’s office in 2006. But as that campaign was getting underway, he was indicted — wrongfully, according to scores of attorneys general from states across the nation — convicted and given a harsh prison sentence by a prosecutor and judge with links to GOP operative Karl Rove. The case was the subject of a CBS 60 Minutes report and documentary film. Now 73, Siegelman has devoted himself to promoting judicial and prison reform.