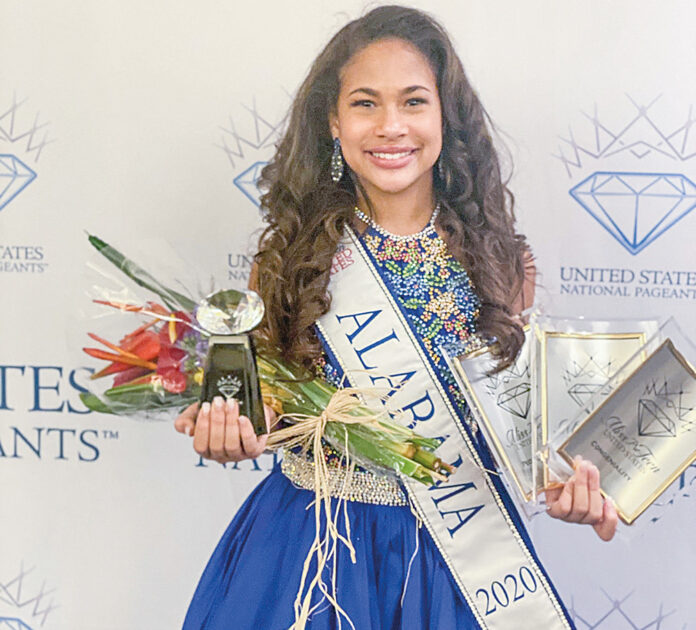 Michaela Sanford is in sixth grade and is already making a name for herself. The Drake Middle School student recently placed First Runner Up at the Miss United States Pageant for the preteen division.

Sanford has been performing in pageants since she was in the first grade.

She traveled to West Palm Beach, Florida, for the Miss United States competition in October, and she placed First Runner Up.

Since Sanford made it into the top five candidates for the Miss United States pageant, she had to deliver a platform speech. Both of Sanford’s grandmothers were diagnosed with cancer and she based her platform, Supporting All Cancer Survivors (SACS) around their diagnoses.

Although she has been competing for years now, Sanford said she still gets nervous. Before the competition, meeting the other girls helped to center and ready her for the performance, she said.

“I was happy, but I was also a little sad,” Sanford said, about the outcome of the Miss United States Competition. “I mean you don’t have to [win] but you get so close … I was really proud of myself, but I knew I did my best.”

Next up? Sanford said she’s going to keep competing.

“I want to try different systems, but I really did like the Miss United States system,” Sanford said.

One day she’d like to compete in the Miss University pageant. Of course, for now, she’s still a middle school student in Auburn. When she got back from Florida, Sanford was able to share the experience with her classmates.

“It’s not just about being in a gown and a dress but you actually get to have the opportunity to speak to five judges that don’t even know you and they’re just wanting to know about you,” she said. “You do get to be in a gown and a dress, not just to look pretty, but you also get to talk about something that you’re passionate about.”

Too, she can potentially win scholarships and funds through pageantry. Not only could this be applied to her college fund, she said, but she could use the money for her SACS platform.

“I can do a lot of things when I get older with just doing pageants,” she said.

Sanford said she can also use the pageants as a way to serve her community of Auburn.

“The way I serve my community is [through] Ronald McDonald,” she said.

The pre-teen works through Ronald McDonald to serve women and children in the area, she said. Sanford said she enjoys being able to serve as a role model.

Sanford has accomplished a lot, but to add onto her pageantry wins, she was also in a recently released documentary, “There She Is.”

“It’s about what girls really go through about pageants and what pageants there are,” Sanford said.

“It’s more than just what you think it is,” she said.

The documentary crew filmed her entire pageantry experience in Florida, Sanford said, because they were impressed she was competing on a national level.

“There She Is” is currently available to stream on Amazon Prime.