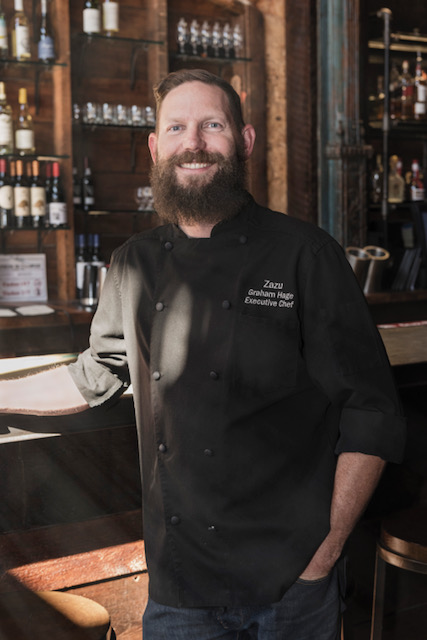 A smile of remembrance crosses the face of Zazu Gastropub owner and executive chef Graham Hage as he reflects on the woman who inspired him to cook.
“My mom (Anne) was always cooking … I remember at Thanksgiving I’d come down and start helping her cook when I was little. I enjoyed doing that with her, and as I got older, she would teach me to do dishes that her parents and grandparents had made,” Hage said. “My mom, except for some other life experiences I’ve had along the way, is the biggest influence on me and my cooking.”
Hage, a Houston native, said those childhood memories in the kitchen stoked his desire to one day attend culinary school and become a chef.
After high school, Hage said he followed his sister Emily east to Auburn University, where he majored and graduated with a degree in international business. While in college, he said he worked part time at several restaurants, which helped cover tuition and served as a method of honing and strengthening his cooking skills.
Following his mother’s death in 2002, Hage said he went home and enrolled in a year-long program at Houston’s Culinary Institute LeNotre to realize his lifelong dream.
“Having worked in the industry before, I knew a lot more than most of the kids that were there, and I helped them when I could. It was a fun and enjoyable experience, and I learned a lot,” Hage said.
Hage said his first job out of culinary school was at the Weston Lakes Country Club in Houston, where he worked as both their general manager and executive chef.
Four years later, Hage said he received a job offer to return to Auburn to work at Auburn City Limits. Struggling financially, ACL owner Beverly Webster offered the business to Hage, who said he jumped at the opportunity to own and operate his own restaurant.
Rebranding the business and renaming it ‘Zazu Eclectic Eatery’, Hage said he transformed it into a fine-dining establishment with a focus on seafood, which overnighted products from as far away as Hawaii.
Following a relocation to downtown Auburn in 2008, soaring rent prices sent Hage looking for a new home for his restaurant in 2014.
“We started looking in Opelika first, because we’d been here a few times with the wine trail and other events. One thing we loved right off was the old architecture of the buildings here in downtown,” Hage said. “I called my friend Pam (Powers) Smith and she told me that the owner of this building was looking to renovate and rent it out to someone. It was just walls, floors and dirt at the time, but I knew right away that this was where I wanted to be.”
After a 14-month-long renovation process, Hage said they reopened the business as ‘Zazu Gastropub’ in October 2015.
At his Opelika location, Hage describes the atmosphere as a casual, laid-back dining experience, and a menu that is simple but broad.
Hage characterizes Zazu’s offerings as “comfort food made from scratch.” Partnering with local businesses and groups including Red Clay Brewery and O Grows Community Garden, he said the menu is seasonal and constantly changes to mirror the availability of produce used at the restaurant.
“Hopefully, there’s something here for everyone. We’ve got steak, seafood, chicken, burgers, a huge beer selection and a good wine selection,” Hage said.
As both Zazu’s restaurateur and executive chef, Hage said he overcomes daily hassles and stress by dwelling on his mother and her lasting impact on his life.
“Obviously, there’s tough days that you’d want to call on the phone and hear the words of wisdom and encouragement, but I still can kind of hear her talking to me when stuff’s not going right, telling me to keep my head up and just get through it. She’s definitely still a big factor in my life,” Hage said.
Looking to the future, Hage said he wants to continue expanding his clientele and open a butcher shop in downtown Opelika to sell the cured bacon and homemade sausage that Zazu currently makes in-house.
Outside of the restaurant, Hage said he enjoys spending time with his two sons Lodan and Hudson and being active outdoors.