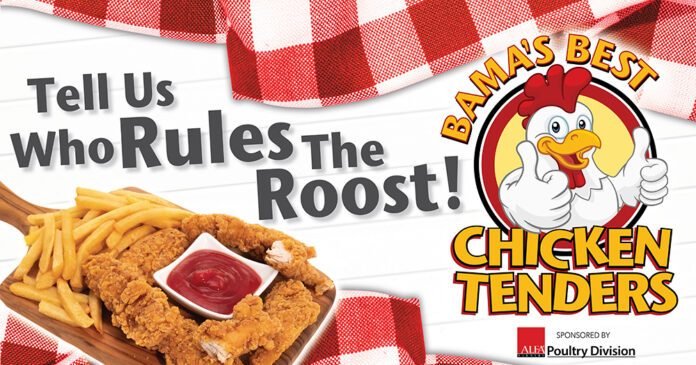 Chicken tenders please the palate of even the pickiest eaters, and that is one reason the Alabama Farmers Federation is on a search to find the local eatery that serves up Bama’s Best Chicken Tenders.

“Alabama ranks in the top three in the U.S. in broiler chicken production, which are chickens raised for meat,” said Federation Poultry Division director Russ Durrance. “So this contest not only provides a fun way to promote and support local restaurants, it also helps make a direct connection between our poultry farmers and the food we all enjoy eating.”

The Federation’s Poultry Division is sponsoring Bama’s Best Chicken Tenders contest. Finalists will each receive a plaque. The winner will receive an additional plaque, prize money and features in the Federation’s Neighbors magazine and on Simply Southern TV.

Nominations will be accepted starting today through June 9.

To make a nomination:

Note:  Bama’s Best Chicken Tenders seeks to promote Alabama-based restaurants, food trucks and professional cooks. National chains will not be eligible. However, a specific location of an Alabama-based chain will be eligible to compete.

Local establishments with the most nominations will become contest semifinalists in the Edible Eight.

The next step whittles the semifinalists down to the Flavorful Four. Voting will take place June 14 to 21 through a photo album of semifinalists posted on Simply Southern’s page at Facebook.com/SimplySouthernTV. One like equals one vote.

The four with the most votes, or likes, by 3 p.m. CST on June 21 will be the contest’s official Flavorful Four finalists. Judges will visit those establishments in early July to determine the winner.

U.S. Congress has recognized Spanky’s Restaurant in Savannah, Georgia, as the first to invent the chicken finger.

Americans buy more chicken than any other meat.

In 2018, Americans ate a record of 93 pounds of chicken per person.

Chicken is the second most widely eaten meat in the world, accounting for 30% of global meat consumption.

Eight to nine billion chickens are consumed over the course of a year in the United States.

The Alabama Farmers Federation is the state’s largest farm organization with more than 350,000 member families. For more information, visit AlfaFarmers.org.

“Simply Southern TV” is a production of the Alabama Farmers Federation with major support from Alabama Farmers Cooperative. For more information, visit SimplySouthernTV.net.