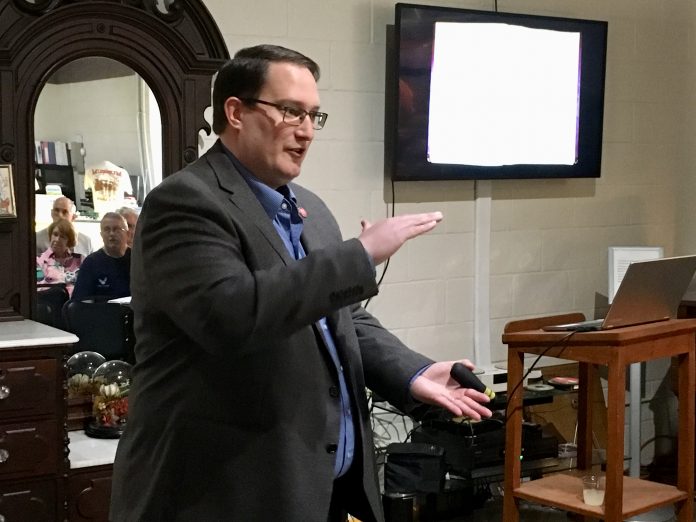 By Keith Huffman
For the Opelika
Observer

Seven historical documents that shaped Alabama will be displayed in an upcoming exhibit as part of the state’s bicentennial celebration.
The exhibit, “We the People,” will allow visitors to get a close look at the state’s six constitutions, according to Scotty Kirkland, who serves as the exhibits, publications and programs coordinator at the
Alabama Department of Archives and History in Montgomery. The Ordinance of Secession, which resulted with the state being the fourth to secede from the Union in 1861 after a 61-39 vote, will be featured as well.
The occasion will mark a special time for “Alabama’s defining documents,” said Kirkland, who served as guest speaker last Saturday at the Museum of East Alabama during the Genealogical Society of East Alabama’s quarterly meeting.
“It’s one of the few times that all of the documents have been displayed together,” Kirkland told the Observer. “And it’s the first time, we believe, that they’ve all been displayed together outside of our building in downtown Montgomery.”
The exhibit will first be held at the Huntsville Museum of Art on June 30 to Aug. 11, according to Kirkland. In fact, its presence in Huntsville on Aug. 2 will commemorate a special occasion.
“The 1819 constitution will be back in Huntsville on the 200th anniversary of when it was signed,” Kirkland said. “So we’re excited about that.”
Afterward, on Nov. 3 to Dec. 31, the exhibit will be available at the Museum of Alabama in Montgomery, according to Kirkland. In addition to seeing the documents, the public also will have opportunities to listen to guest speakers and review profiles of key men and women during the time periods in which the documents were created.
“The exhibit has the seven documents, but it also looks deeply at sort of what these documents say about Alabamians at the time, the people who lobbied for them, the people who fought against them,” Kirkland said.
The exhibit will highlight the conservation of the documents as well, Kirkland added, highlighting the recent completion of a yearlong effort to conserve the historical pieces and ensure they’re ready for public display.
“In doing so, we make sure that they’re safe to be put on display for a couple of weeks in Huntsville, a couple of weeks in Montgomery,” Kirkland said. “But, also, that they’ll survive so that Alabamians, when they celebrate their 300th anniversary, can look at them and debate them, and think about them.”
Plans for the exhibit were inspired by another state celebration that was held decades ago, Kirkland highlighted.
“Back in 1969, when the state was celebrating its sesquicentennial, Huntsville had a 6-month display of the 1819 constitution in the courthouse,” he said. “And there are still some people around there [who] remember that. And so as planning for the bicentennial was kicking off, we got a request for the 1819 constitution and we thought, ‘Well, what a good time to think about displaying a lot of these documents together.’
“We’ve had this 3-year celebration now. People have been thinking about Alabama history and Alabama future as one conversation, and that’s really good. And we thought that what better to facilitate… the end of the bicentennial, and continue that conversation, than with talking about these documents that really define what it means to be an Alabamian.”
Bert Harris, GSEA program chair and a board member of the Museum of East Alabama, said the exhibit will be a timely attraction offering a wealth of historical insight.
“It’s very fitting that, during our bicentennial year, look back on the things that shaped Alabama as it exists today,” Harris said. “And, of course, these founding documents – the six constitutions and the
Ordinance of Secession – were important documents that represent important decisions that were made along the way, for good and for ill. But history is a compilation of events and decisions that need to be examined. Not always the best decisions, but always impactful.”
Others who attended the GSEA meeting are looking forward to seeing the exhibit.
Mary Lou Smith, of Auburn, remarked about the intelligence that was required to create such centuries-old documents, a factor of which she deemed as overlooked today.
“Just the level of education in government,” Smith said, afterward adding, “It’s just something that we don’t consider.”
Bill Page, of Smiths Station, plans to visit the exhibit when it’s in Montgomery and observe the signatures. He, too, enjoyed Kirkland’s presentation.
“He gave an excellent talk about the history of Alabama,” Page said.
Edna Ward, an Opelika resident and editor of GSEA’s quarterly publication, “Tap Roots,” is anxious to see the historical pieces as well.
“It’ll be so good for everyone in Alabama to look at those documents,” Ward said.