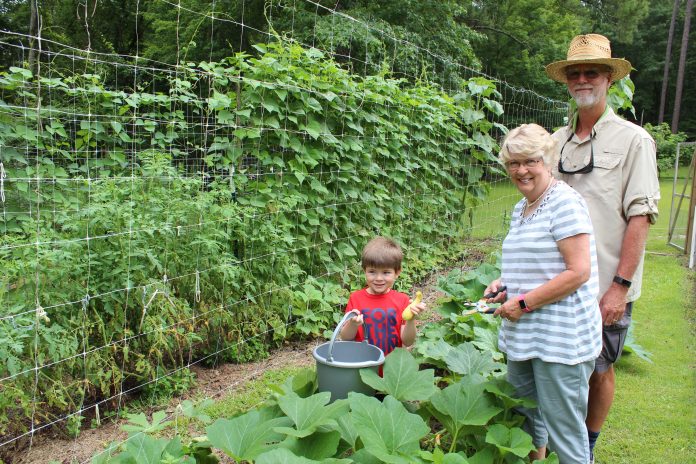 Located in a country setting on Society Hill Road, the home of Claire and James Watts provides spacious grounds for a garden, blueberry and scuppernong bushes and fruit trees. Now that they are both retired, the Watts enjoy working in the garden and spending time with grandchildren.

Claire and James call their garden Fort Knox, as it has wire on the lower part to keep rabbits out and netting around it to prevent deer from getting to the garden.

Their garden includes several kinds of peppers and tomatoes with Cherokee purples and Early Girl being their favorites, green beans, butter beans, squash and zucchini. They also have scuppernong vines and blueberry bushes, as well as fruit trees.

James makes scuppernong and blueberry wines, which is a long process. They also use the scuppernongs for snacks, and Claire makes jelly.

When the figs are ripe, Claire will make preserves or cook them down to serve at breakfast. She is sharing her recipe for Pear Honey, which is her favorite to make with fresh pears. Pies and other desserts are created from apples from trees on the property.

Claire grew up in Goodwater, and her family moved to Wedowee when she was in the 11th grade. While her family didn’t have a garden, a farmer came to their home every week selling fresh vegetables. Her mother, who grew up on a farm, would get peas that they would shell and freeze. Her mother had a fondness for cooking southern foods and also made small yeast rolls every day.

Claire met James in Wedowee, and they began dating in high school.

Claire taught school in Lafayette for four years and then taught kindergarten in Opelika schools, including Carver and Southview for 21 years. James has retired from being a letter carrier in Opelika.

The Watts have three sons and seven grandchildren. Tim and his wife Julie live in Notasulga and have a 2 years son, J.D., named after his two grandfathers, James and David. Brett and Michelle live in Jacksonville, Fla, and have three children, Layla, 11; Aubrey, 9 and Holden, 6. Kevin and Carrie reside in Opelika and have three sons, Carter, 9; Miles, 7 and John, 3 and a half.

Claire enjoys cooking and is organized. She keeps a list when they run low on anything to avoid extra trips to the grocery store since they live in the country.

“Having a degree in home economics in no way prepares one for country living or cooking,” says Claire. “I was constantly amazed at the country life of my in-laws. I grew up shelling beans and peas and freezing and canning, but country life is composed of far more.

“As a newly wed attending graduate school in Auburn,” she remembers, “we were on a strict budget that allowed little meat. One Sunday after visiting my in-laws in rural Randolph County, we were offered a frozen rooster. They were poultry farmers and specialized in laying hens. A new shipment arrived with a few stray roosters. The roosters had been rounded up, necks rung, defeathered and placed in the freezer.

“We both loved fried chicken, and I found a recipe in an extension cookbook. Unfortunately, no one told me not to fry a rooster. Their meat is stringy and tough to chew. We had to eat it several more times that week. Later, my mother-in-law told me roosters were suited for dumplings and stews.”

Claire admits with a smile that she had a few cooking mishaps, but she learned to be a good cook. The Elegant Zucchini and Tomatoes recipe is a popular dish with family. Along with her vegetable recipes, James will grill vegetables with a drizzle of olive oil and a sprinkling of kosher salt.

The Watts have been in a supper group for over 30 years. The group started with progressive dinners, and now takes turns hosting every other month. When entertaining, Claire serves appetizers by their lovely pool area.

From a dozen blueberry bushes, they will pick between 30 and 50 gallons a year. The blueberries are easy to freeze. After they are picked, she leaves them on the counter for a day to sweeten. Then, they are placed in zip-lock bags and frozen. They are washed when ready to use.

Claire is sharing her mother’s coffee cake recipe with blueberries. The original recipe called for raisins, but she substituted blueberries, which works better.

“I enjoyed teaching,” says Claire. “It was what I wanted to do, and it was fun. Now I enjoy reading, doing things with the grandchildren and working in the garden. I feel blessed.”

Pear Honey
8 cups (about 3 lbs.) peeled, cored and chopped pears
One 20 oz. can crushed pineapple with syrup
10 cups sugar
1 Tbsp. lemon juice
2 pkg. Sure Jell
Mix all ingredients and cook until pears and tender and mixture thickens.
Place in sterilized jars and seal while still hot.  Makes about 8 pints.