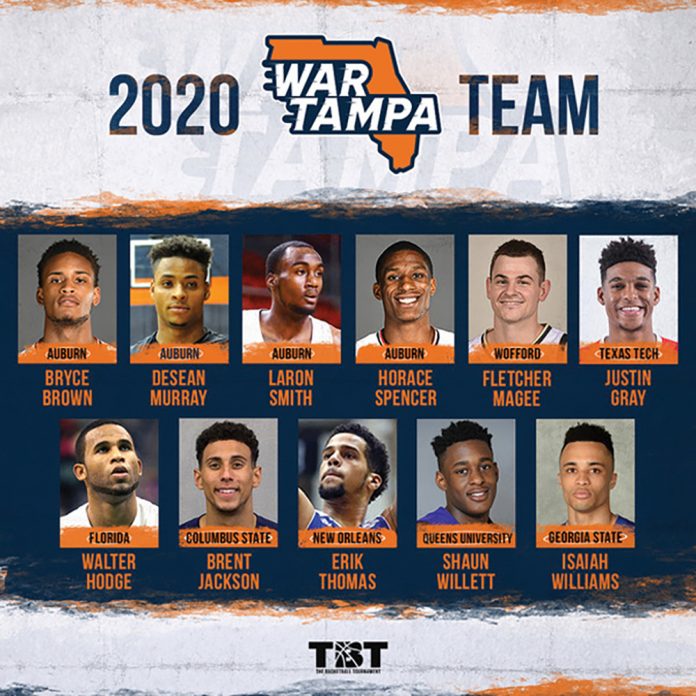 In a reunion of sorts, Bryce Brown and Horace Spencer –– who last shared a court in the Tigers’ 2019 Final Four run –– will be teaming up with former Auburn players Desean Murray and Laron Smith.

Spencer and Smith reunite after spending this past year as teammates in Argentina’s professional league. While Spencer, Brown and Murray all played together for the Tigers during the 2017-18 season, when they won the SEC Regular Season Title.

War Tampa, who, for obvious reasons changed their name from Tampa 20/20, is “a team mixed with Auburn guys and Florida boys,” according to team General Manager Matt Moschella.

Among others, joining War Tampa is former Wofford point guard Fletcher Magee, who ended his collegiate career in 2019 as the NCAA’s all-time leader in three-point field goals made; and Walter Hodge, two-time NCAA champion with Florida in 2006 and 07.

Traditionally, TBT features 64 teams, with games played across nine different locations and a grand prize of $2 million; however due to COVID–19, this year, players and staff of a reduced 24-team field will quarantine in Columbus, Ohio and take the court for the 10-day fanless event.

TBT began in 2014 and gained publicity in part because of the Elam Ending –– a unique way to end a game which eliminates the game clock at the end play and sets a target score. The NBA recently experimented with the Elam Ending in the 2020 All-Star game.

The Elam Ending renders the “Hack-a-Shaq” strategy –– committing fouls on a poor free throw shooter to the purpose of lowering opponents’ scoring –– virtually useless and leads to a cutthroat ending with an emphasis on clutchness and shot-making.

TBT’s winner-take-all pay structure gives fans an unselfish, unique and intense brand of basketball. In a year when March Madness was cancelled and uncertainty looms over the NBA season’s restart, TBT will deliver the pulsating, nerve-racking and often unforgiving feeling that makes postseason, elimination basketball so appealing.

NCAA tournament legend Malachi Richardson, who helped lead Syracuse on an improbable Final Four run in 2016, Kyle Hines, the only American to ever win four EuroLeague titles, and 18-year NBA veteran Joe Johnson are just a few other names headlining TBT this summer.

War Tampa is seeded No. 17 and have a first round matchup against House of PAIGN on July 5. If they advance, last year’s champion, Carmen’s Crew (the Ohio State alumni team), await them in the second round.

All games will be shown on ESPN and the schedule is as follows:

To support War Tampa or for more information on the team, visit www.thetournament.com/teams/war-tampa.