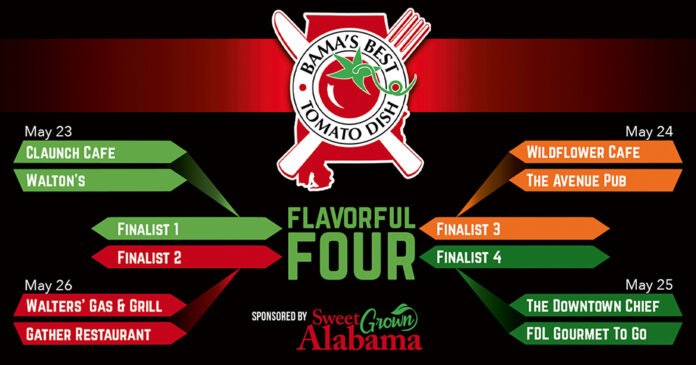 They specialize in serving tomatoes in the form of pie or green ones they fry. Now, eight Alabama businesses will compete to earn a prize for creating dishes people like to eat.

Semi-finalists for the Bama’s Best Tomato Dish contest were selected through nominations received on Facebook May 2 to 18. They are:

– Walters’  Gas and Grill in Society Hill for Tomato Pie

– The Avenue Pub in Tuscaloosa for Conecuh + Pimento Green Tomatoes

– FDL Gourmet To Go in Montgomery for Heirloom Tomato Pie

Deemed the “Edible Eight,” one semi-finalist were be pitted against another in daily match-ups May 23 through 26 on Sweet Grown Alabama’s Facebook page and Instagram stories. Votes from both platforms will be combined to determine daily winners, which will move into the Flavorful Four.

 May 23 – Claunch Cafe in Tuscumbia vs. Walton’s Southern Table in Huntsville

 May 24 – Wildflower Cafe in Mentone vs. The Avenue Pub in Tuscaloosa

 May 25 – The Downtown Chief in Gadsden vs. FDL Gourmet To Go in Montgomery

 May 26 – Walters’ Gas and Grill in Society Hill vs. Gather Restaurant in Atmore

Judges will visit the Flavorful Four and announce a winner later this summer. Along with bragging rights, the winning restaurant will receive a plaque, cash prize and features in Neighbors magazine and on Simply Southern TV.

Fruit or vegetable? Scientifically, tomatoes are a fruit. However, nutritionists categorize tomatoes as a vegetable.

California ranks No. 1 in the U.S. for tomato production, followed by Florida, Indiana and Michigan.

Tomatoes are native to South America. They spread to other parts of the world following the Spanish colonization of the Americas.

Tomatoes are a good source of vitamin C, vitamin A and antioxidants.

Sweet Grown Alabama is a nonprofit foundation that enhances marketing opportunities for Alabama farmers by connecting retailers and consumers to Alabama-grown foods and other agricultural products. Learn more at SweetGrownAlabama.org.The Alabama Farmers Federation is the state’s largest farm organization with more than 340,000 member families. For more information, visit AlfaFarmers.org. Simply Southern TV is a production of the Alabama Farmers Federation with major support from Alabama Farmers Cooperative. For more information, visit SimplySouthernTV.net.