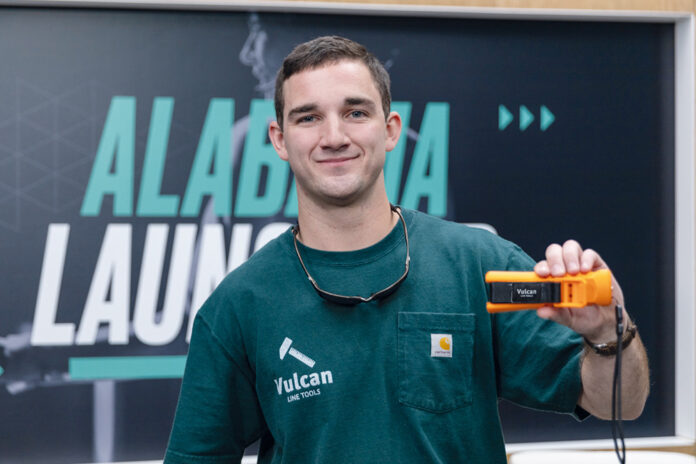 Auburn-based Vulcan Line Tools, the winner of the concept stage competition with a $25,000 prize, offers the Wave Timer, a method for measuring sag, tension and temperature in power lines to reduce costs for electric utilities, improve efficiency and ensure power lines are built properly.

“Alabama is going to be a great home for Vulcan Line Tools. I couldn’t imagine going anywhere else with the company,” said Zac Young, founder of Vulcan Line Tools. “To all future applicants: be ready to work hard, take some constructive criticism for your company and be ready to learn a whole lot, because I sure have.”

Vendrix claimed the seed stage prize of $50,000. The Birmingham-based company offers cards and software, customized for the construction industry, to help companies manage spending among employees and keep track of budgets in real-time.

“Alabama Launchpad is exposure galore for a startup company in Alabama and that can be one of the biggest challenges you face as a new company: people don’t know you exist,” said Joe Turner, co-founder of Vendrix. “Launchpad helps you with marketing and networking opportunities with other people out in the industry to get your name out there.”

“We were thrilled with the level of competition at both the concept and seed stage this cycle, kicking off the first cycle of Alabama Launchpad on a high note,” said  Miller Girvin, vice president of Innovation and Entrepreneurship at EDPA. “Both Vulcan Line Tools and Vendrix represent the strength of innovation here in Alabama, particularly in industries that have set the state apart over the years. We are excited to watch both companies grow, thanks in part to the funding and mentorship from the Launchpad program.”

Cycle 1 2021 welcomed programmatic changes to Alabama Launchpad, including a greater focus on intensive and personalized support for participating entrepreneurs to help all companies make progress regardless of the competition’s outcome. Launch Advisors, who are carefully selected business subject matter experts, worked individually with all Launchpad finalists, preparing them for the final pitch competition to the panel of volunteer judges from around the Southeast. The virtual event was co-hosted by Girvin and Karim Budhwani, founder and CEO of CerFlux, a former concept and seed stage winner of the Alabama Launchpad pitch competition.

Cycle 1 2021 brings Alabama Launchpad to new milestones – it has now funded 102 Alabama startups since its inception. Over the past 15 years, Alabama Launchpad has awarded $5.6 million in non-dilutive funding to the winning companies, which today have an estimated combined post-money valuation of more than $400 million and employ more than 700 people.

The Alabama Launchpad program has funded growing companies like BLOX, Immediate, Acclinate Genetics and more by offering nondilutive prize money for its pitch competition. The EDPA is a private, nonprofit organization that supports business recruitment and expansion efforts in Alabama and promotes innovative and emerging startup companies through its Alabama Launchpad program.