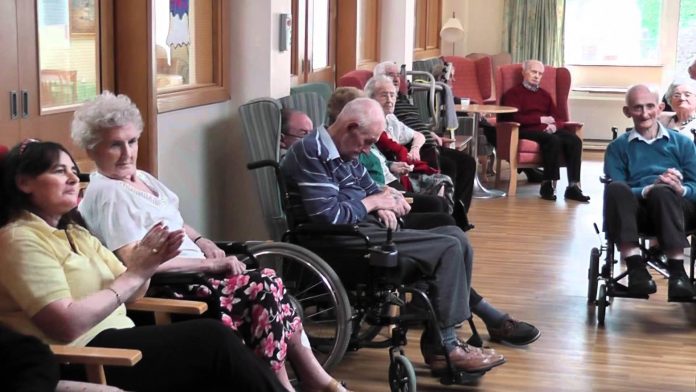 They are old, but they love singing. So on Sunday afternoons, Jeremy sings to them. The residents who can still sing, do.
Jeremy visits the nursing home after playing piano at the Methodist church. He sits at the upright in the cafeteria and plays the classics.
Wheelchairs roll in by the dozen. Residents park in rows. Early birds get seats up front. Stragglers sit in the nosebleeds. Jeremy has been playing music since age six. He can play any tune in the hymnal like a bona fide Cokesbury jukebox. He does it with a smile.
He sings “Old Gospel Ship,” “I Saw the Light,” and “Church in the Wildwood.” When he finishes, the residents of the nursing home clap. Some louder than others.
Now the real fun begins. They swarm Jeremy. They tell him stories. They touch him. They hug him.
“I was a logging man,” one old man tells Jeremy. “I cut wood in South Alabama, did I ever tell you that?”
“No sir.” An old woman touches Jeremy’s face. “You look just like my son, you’re so handsome, just like my son.”
Another woman wheels toward Jeremy in an electric chair. She hands him an old envelope. “Would you autograph this? You’re going to be famous one day, I just know it.”
He’s puts his John Hancock on the paper. She wheels away like she’s just confiscated Elvis’ underpants.
It’s lunchtime. The cafeteria comes alive with smells of canned corn, Salisbury steak, and creamed potatoes. I sit with Jeremy, we talk over plates of lukewarm apple pie. But our conversation is cut short.
Jeremy only has a little time left to make his rounds. He jokes with the old man who is from New York. He laughs with the elderly woman whose husband was a florist. He talks to Luanne, who misses her daughter. He holds hands with Ernesta. He hugs Francine.
He sits beside Davy—the man with Alzheimer’s. Davy says that he used to be a pianist when he was young.
“Mama taught me to play,” says Davy. “She was a graduate from a fine institution in Tuscaloosa.”
Roll T — well, nevermind.
Davy’s mother survived a Depression and two spouses. She raised her kids on peanut wages. Davy returned the favor. She lived with him until she died at age 96. “Used to play for her every night,” said Davy. “But I can’t move my left hand no more.”
Jeremy has an idea. He rolls Davy to the piano before he has finished his hamburger steak.
He tells Davy, “I’ll play the left hand, you play the right.”
Davey plays the melody to “There is a Fountain.” Jeremy plays the bottom of the piano; Davy takes the top. The song comes out rough, but identifiable.
The people clap when the music finishes. They play “Amazing Grace” next. The old man starts crying. “Thank you,” Davy says. “I haven’t played the piano in forty years.”
One nurse explains that Jeremy does this with Davy almost every week. “And every week,” says the nurse. “It’s just like the first time.
Here comes Barbara. She wheels toward Jeremy. Barbara had a stroke several months ago. Before that, she was a Librarian. Her hobby was teaching underprivileged kids to read. She also helped several apply to college, and receive State-U educations. She’s done a lot in her day.
Barbara is half paralyzed, but her mind is good. She is on her way back to her room because she has spilled food all over her shirt. The nurse parks her beside Jeremy. Barbara touches him. Her mouth is open, her words want to come out, but it takes work.
“You. Are. An. Angel,” she tells Jeremy. “Please. Come. Back. Please.” “Yes ma’am,” says Jeremy. Barbara goes on: “This has been the greatest day of my life.”
Jeremy’s face is swollen. His eyes are pink. He kisses Barbara’s cheek. Then she’s gone. The greatest day of her life. Yes sir. It was one of mine, too.
Sean Dietrich is a columnist, and novelist, known for his commentary on life in the American South. He has authoredseven books.