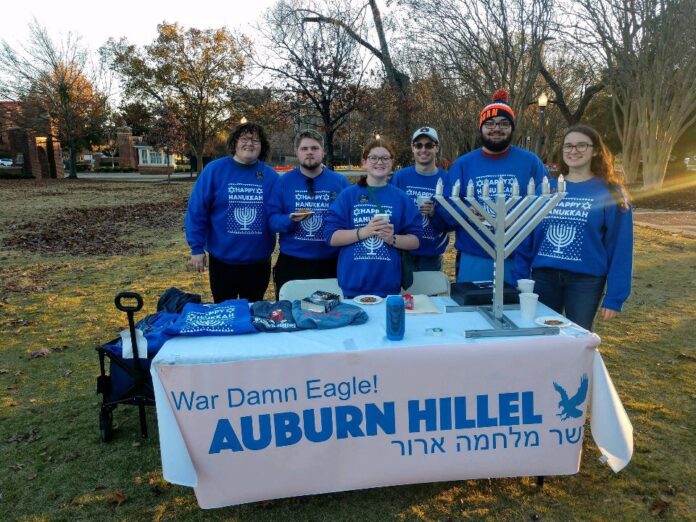 Families will celebrate many of the annual Jewish Hanukkah traditions at home this year.

Hanukkah begins on Dec. 10 and continues through Dec. 18.

“Usually we have a Hanukkah party at the synagogue sometime during the eight days of Hanukkah,” said Susan Youngblood, co-president of the Congregation Beth Shalom. “It’s such a kid-friendly holiday that we usually plan the party as such. We have pizza, latkes and sometimes sufganiyot. We lead Hanukkah songs with a guitar or play CDs. Many families bring a Hanukkiyah and their candles, and together we light them and say the blessings. Most candles burn quickly, so families are ready to bring their Hanukkiyot [plural of Hanukkiyah] home at the end.”

The congregation will need to plan differently this year.

“Likely we’ll find a convenient evening during that week and light our Hanukkiyot together on Zoom,” Youngblood said. “Maybe we’ll have a recipe swap or a lesson in how to make sufganiyo.”

A Hanukkiyah is the menorah that is lit annually for eight nights. It has nine candles.

“We start with the shamash (the helper candle, which sits at a different level than the others) and one candle for the first night, placing the first-night candle on the right-hand side,” Youngblood said. “The next night, we place two candles, the next three, etc. Each night when we light the candles, we use the match or lighter only on the shamash and then use its flame to light the candles from newest added (left-most) to oldest (right-most). We say blessings and let them burn all the way down.”

Normally, the event draws a crowd from around the city, all eager for the start of the holiday season. This year, however, the event may not take place. The university is still planning if and how the tree and menorah lighting could happen.

The lighting of the menorah, and the story that accompanies it, is central to Hanukkah.

Traditions date to 167 BCE when Judean Jews fought against the Seleucid oppressors.

Jews recaptured the Temple in Jerusalem, rededicated it and observed a celebration. Using a tiny amount of oil, the Jews were able to burn candles for eight days, according to myjewishlearning.com.

The menorah is lit annually, but Jewish communities and congregations often eat food associated with the oil as well.

“We also eat fried foods to remind us of the oil central to the Chanukah story; these include potato latkes and sufganiyot (little jelly doughnuts),” Youngblood said. “We eat gelt (chocolate coins) too.”

Hanukkah, whether online or virtual, is still an important event to Jewish communities.

“Like Passover, Hanukkah is a holiday that celebrates the liberation from oppression,” the myjewishlearning.com website said. “It also provides a strong argument in favor of freedom of worship and religion. In spite of the human action that is commemorated, never far from the surface is the theology that the liberation was possible only thanks to the miraculous support of the Divine.”