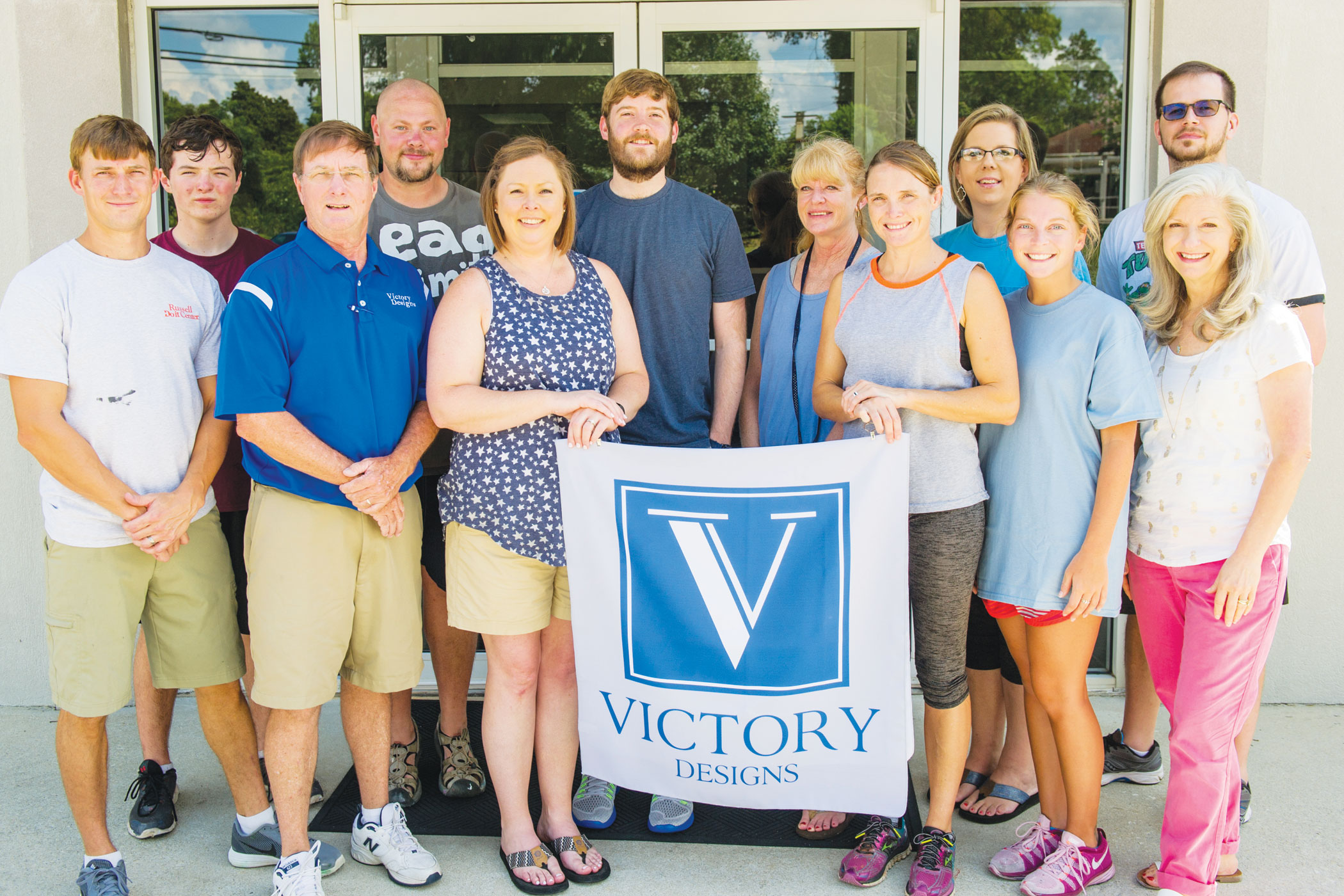 Victory Designs, winner of the 2016 Opelika Small Business of the Year Award, was established nearly 20 years ago.
The business, originally named OA Sports, served primarily as a sporting-goods store.
Opelika residents Tim Gore and Susie Hamlet bought the business three years after its founding and turned it into a screen printing and embroidery shop, and moved it to downtown Opelika.
After several years of running the operation, Gore and Hamlet sold the business to Rainer Meadows and Bill Price in 2010.
Four years later, Price decided to move on from the business and sold his portion to Meadows in 2014.
Meadows, an Opelika native who worked in banking for 32 years, said that the transition from banking to screen printing was smoother than expected.
“Coming from a banking background, I really didn’t know much about screen printing, but Tim and Susie had laid a solid foundation for Bill and me, and that got us off to a good start,” Meadows said. “When we took it over, we kept doing a lot of the same things they had been doing, and just expanded on that. Thanks to them, Victory Designs was a pretty entrenched business by the time we got there.”
For many years, Victory Designs rented a space in the Cottage Walk building, which included businesses like Cottage Café, Picket Fence and Victory Engraving. But, as the business progressively grew larger and larger, Meadows said he was faced with a tough decision.
“I knew that, at the pace we were growing, we would have to do something, so I decided that moving the business was the only way we could accommodate our needs,” Meadows said.
He and his staff relocated Victory Designs in January 2015, and moved into the old Curry store, located at 1525 2nd Ave. in Opelika.
Meadows attributes the business’s growth and need for relocation to the internet and word of mouth.
“I believe our presence on social media and the internet is a large contributor. We have a website and pages on Facebook, Instagram and Pinterest, which have helped spread the word about our business to not only people in this area, but all over the country,” Meadows said. “But for those here in the area, seeing people wearing our shirts is almost like having a walking and talking billboard.”
The full list of Victory’s services includes: screen printing and embroidering of apparel, engraving for trophies and awards, as well as promotional products for Greek organizations, schools, churches, non-profit organizations, Auburn University campus organizations and departments, and a host of other groups and businesses.
“Our biggest customers are the Greek organizations on Auburn’s campus, but our bread and butter is our local customer base, which is also a big part of our business,” Meadows said.
Besides producing quality apparel and merchandise, Meadows said the business’s Christian values and high standards of customer service are paramount to their success.
“Our business philosophy is as simple as this: we’re going to provide an excellent, high-quality product at a competitive price and deliver it on time. If there’s something wrong with it, we are going to fix it and make it right,” Meadows said.
Meadows, in addition to his ownership role, assists in other daily operations of the store, such as billing, screen printing and taking orders. In recent years, however, Meadows family has pitched in to help.
“My wife Susan helps out quite a bit, and my kids Jennifer and Price are here now, so with them and my staff, we manage to get the job done,” Meadows said.
But Meadows said he thinks that the business’s growth is only in its early stages.
“We’re already looking to add on to this current building we’re in, which speaks volumes about how well we’ve done in the past year and a half,” Meadows said. “We also are looking at delving more into promotional products like pens and notebooks, which are our next best business opportunity.”
Although the business has an exciting future ahead of it, Meadows said it also brings its fair share of concerns and problems, which he feels confident that he and his staff can handle.
“We recently obtained a license which gives us permission to do work for other groups on Auburn University’s campus besides sororities and fraternities, which means we will need to expand our sales force. And, with that growing demand, we might have to go from working 8-5 during the week, and expand to a second shift schedule and having to work on Saturdays, but we’ll cross that bridge when we come to it,” Meadows said.
Though the university is a key contributor to Victory’s success, Meadows said that faithful Opelikans are the reason Victory has flourished in the city.
“The city of Opelika is the backbone of our business and has been and will continue to be I hope,” Meadows said.
Thinking ahead, Meadows is optimistic that the business will stay in his family. He plans to pass it down to his children when he is “way too old to be doing this anymore.” And in regards to the future of the company, he says that the priority of the business will never change.
“I think of this business, or banking or newspaper work as a people business, where you always have to work with people and make sure they’re happy,” Meadows said. “We will always strive to provide our customers with great service and quality products that they’ll enjoy for a long, long time.”