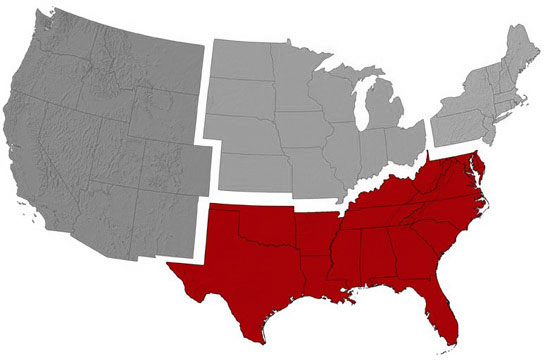 A while back a study was published that revealed that the South, the good old Bible belt, leads the United States in murders and most other violent crimes. As some of our Northern brethren enjoy observing, if you took the Late Confederacy out of the national calculations, the U.S. murder rate compares favorably to countries like England and France.
But look, murder and mayhem are part of our heritage. Before the Civil War it was common to find Southerners armed with “Pistols, Dirks, and Bowie knives” and “not very dilatory in the use of them.” Why? Because, as an antebellum Alabama planter observed, people believed that because they “are the source of law” each man should be ready to be “his own law-maker and law-breaker, judge, jury, and executioner.”
But not everyone believes the answer is so simple. Some who study the South  blame our violent tendencies on slavery, an institution which made it acceptable to use violence to get someone to do what you wanted them to do. Others say that child-rearing practices are the cause, for (as polls continue to show) Southern parents use corporal punishment more frequently than parents in other regions.
But not every murderer is a descendent of slaveholders, and most kids who get spanked never assault anybody, so what else can we blame it on.
How about a “siege mentality” – that general feeling that somebody is out to get us and they will if we don’t get them first. Southern history is full of other folks, usually Yankees, coming in to mess with things. And when they do, we tend to strike back — violently.
And usually in the summer.
Don’t forget the weather. Studies have shown that in sunny climes “heat-induced mental stress can lead to loss of perspective, irritability, and violence.” But on the other hand, hot weather has also been blamed for making Southerners laid-back and “too lazy to hit a lick at a snake,” much less kill someone. How does air conditioning fit into the picture? Do more murders occur when the AC unit shuts down? There’s a new category to consider.
Some people have blamed our violence on the availability of firearms and the “gun culture” of the region, but owning one does not necessarily mean you plan to use it, no matter how convenient killing might be. Something has got to motivate us to reach over and pick up the pistol.
Which brings me to what I call “general meanness.”
Not everyone accepts this as a cause. A few years back in an article I submitted to a “scholarly” journal I listed meanness of the general sort as a reason for Southern violence and the editor told me to take it out, said it was an “ambiguous category” and could not be verified. I could have responded that if he would come down to Charlie’s Chicken Shack on the Old Line Road one Saturday night and wait around until some pulpwood boys arrived drunk he could verify general meanness sure enough. But I didn’t. Figured he wouldn’t understand.
Now from a Christian perspective, the perspective shared by most Southerners, none of these conditions justify taking someone out and doing violence to them. However, these reasons do help to explain why, despite all the preaching that goes on against such antisocial behavior, Southerners do it anyway. But instead of a bunch of causes, is there some characteristic common to Southern violence that we can use to tie it all together?
Maybe.
When I look back on the violence I have heard about, studied, and in a few cases even witnessed in a non-participatory way, I find that many, perhaps most, incidents result from the fact that one of the parties involved felt that his or her honor had been compromised and violence was not only a reasonable response, but one that was right and just.
Which is why Southern violence is so often personal, between friends or family or at least folks who know each other. From the days of dueling down to the modern “Bubba battle” behind the Chicken Shack, insults cut deeper and demand a more violent response if they come from someone you know. Anonymous drive-by shootings aren’t our style. Face-to-face is fighting is.
Which takes me back to that Alabama planter’s assessment of the situation. Because honor is involved, we still can’t accept the idea that someone else – a judge or a jury, a preacher or a priest — should settle our differences for us. After decades of civilizing, we still have to do it ourselves.
And as long as we do, when it comes to violence, Dixie will lead the way.
Harvey H. (“Hardy”) Jackson is Professor Emeritus of History at Jacksonville State University. He can be reached at hjackson@cableone.net.