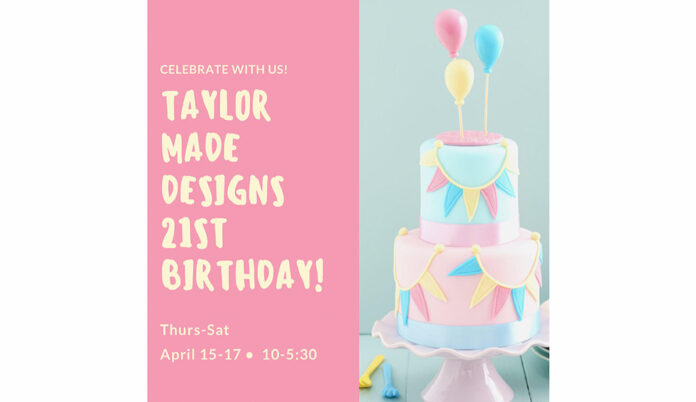 Taylor Made Designs is celebrating its 21st anniversary in its downtown Opelika location on South 8th Street from April 15 to April 17.

Taylor Made Designs is a locally-owned business that specializes in creating handmade jewelry and special gift items. The business has been open since 1991 as a home-based business in Alexander City, but the storefront has been in the downtown area since 2000, according to managing director Taylor Sumrall.

“We moved to Opelika in 2000 and that’s when [my mom Lynn] decided she wanted to open the store in Downtown Opelika,” she said. “Downtown was a very different place 21 years ago … So I mean our hours have changed, downtown has changed in 21 years, but we’re still able to offer really unique products.

Taylor Made Designs has served the Opelika community for 21 years and is a staple for the downtown area due to its longevity. Sumrall has many favorite parts about running the shop over the years, however it’s seeing and meeting new people that brings her the most joy.

“I could probably talk to a wall, but it’s much more fun when people stop in even if they don’t find something they like,” she said. “It’s nice to have the interaction with people and you get to have a lot of interesting conversations. We’re really lucky that Opelika is kind of becoming a really cool place to visit even if you don’t live here. So, you get to meet some really cool people that way that travel and end up in our little town from all over the place. That’s become a nice thing to say.”

However, things have not always been easy over the years. The pandemic has been a time that Sumrall calls “not fun” for local businesses, but Taylor Made Designs has kept a positive outlook of an unprecedented situation.

“We kind of had to shut down for six weeks which is terrifying not knowing what those six weeks were going to look like and then nothing’s been normal,” she said. “So we celebrate the small wins. We were here for Christmas and people have been supporting us during holidays and we were extremely grateful for everyone that did their local shopping

“It’s definitely a gratifying experience to know that people still support you and things like that. We’ve become very creative. We had to start doing Facebook Live so people could see more of what we were doing without coming in physically in the store. It’s a little more work in a pandemic, but [when] you’re a small business owner, you kind of get used to lots of hard work and putting all your eggs in a basket.”

Taylor Made Designs’ 21st birthday party will be a three-day event to prevent from overcrowding in the shop. The anniversary will also make up for not being able to celebrate their 20th anniversary last year due to statewide COVID-19 restrictions at the time.

“We’ll probably do a late shopping day Thursday with some snacks and refreshments and then we’re going to have some swag bags for customers and then we’re going to do giveaways every day – some really fun things partnered with other businesses,” she said. “Then, we always have a few new lines that we have saved that won’t launch until the week of our birthday party … We just want to have a good time and thank everybody for supporting us for 21 years.”

To get updates on the event, go to facebook.com/ events/ 3800502350041624. And to look at what Taylor Made Designs has to offer, head over to their Facebook page facebook.com/tmdopelika.