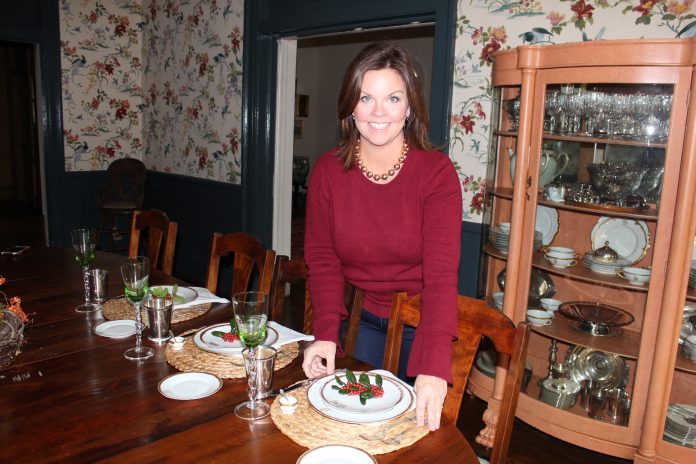 Make-Ahead Hot Artichoke Dip
14-oz. can artichoke hearts, chopped
4-oz. jar sun-dried tomatoes in oil, drained
8 oz. good-quality feta cheese, crumbled
1 cup light mayonnaise
2 to 3 garlic cloves, minced
Juice of half lemon
¼ tsp. black pepper
Garnish with basil, optional
Assorted crackers
In a medium-size bowl combine first 7 ingredients. Refrigerate until ready to bake. (This can be done up to 48 hours in advance.)
Place in a lightly greased 1½-quart baking dish. Bake at 375 degrees for 15 to 20 minutes until hot and bubbly. Garnish if desired. Serve with crackers. Note: For a small crowd, I like to bake only half at a time. Makes 4 cups.

Foolproof Beef Tenderloin with Mustard Horseradish Sauce
1 (4-5 lb.) whole beef tenderloin, trimmed and tied
Vegetable oil
Freshly ground black pepper
Coarse Kosher salt
*Note: Sometimes I add fresh, chopped rosemary to the salt and pepper.
Remove beef from refrigerator and allow to rest for 30 minutes before roasting. Preheat oven to 500 degrees and position rack to center.
Rub meat lightly with oil using your hands. Coat tenderloin well with salt and pepper. Place beef in a shallow roasting pan.
Put in oven and reduce temperature to 450 degrees and roast for 20-30 minutes (22 minutes for rare and 25 minutes for medium rare). Remove meat from oven, cover with foil and allow to rest for 20 minutes. Remove string and slice. Serves 8 to 10 for a seated dinner.
Mustard Horseradish Sauce
1 cup good mayonnaise
1 Tbsp. Dijon (I use Grey Poupon.)
1 Tbsp. whole-grain mustard
3-4 Tbsp. prepared horseradish
½ cup sour cream, not light
¼ tsp. kosher salt
Whisk together all ingredients and serve at room temperature. Can be made ahead.

Garlic Roasted Potatoes
3 lbs. small red or white skinned potatoes (or a mixture)
1/4 cup good olive oil
11/2 tsp. kosher salt
1 tsp. freshly ground black pepper
2 Tbsp. (6 cloves) minced garlic
2 Tbsp. minced fresh parsley
Preheat the oven to 400 degrees.
Cut potatoes in half or quarters and place in a bowl with olive oil, salt, pepper and garlic; toss until the potatoes are well coated.
Dump the potatoes on a baking sheet and spread out into one layer; roast in the oven for at least 1 hour, or until browned and crisp. Flip twice with a spatula during cooking to ensure even browning.
Remove potatoes from oven, toss with minced parsley, season to taste, and serve.

Favorite Green Beans
2-3 Tbsp. olive oil
3-4 Tbsp. butter
3-4 cloves garlic
1 lb. fresh green beans
Salt and pepper to taste
2-3 cups chicken broth
Drizzle olive oil in the pan and melt butter over medium high heat. Wait for all the butter to melt and look foamy.
Next, add the chopped garlic. Let garlic cook for 2-3 minutes and then add the green beans. Stir them around and get them as flat as possible in the pan. Cook until they turn bright green. Then add some salt and pepper.
Cook for a couple more minutes, stirring occasionally. Next, add enough chicken broth to cover them, and stir. Let it come to a rapid boil.
Next, cover beans and turn the heat to medium low, venting the pan so steam can escape. Cook for 15-20 minutes or until most of the chicken broth has cooked out. Serve warm.

Sugar’s Pralines
Recipe is from my dear friend Leslie Register who is author of Leslie’s Party Diaries.
1 lb. (1 box) light brown sugar
1 cup heavy whipping cream
½ cup (1 stick) butter
1 ½ cups pecan halves
In a large microwave-safe bowl, heat sugar and whipping cream on high for 11 to 13 minutes, until hot and bubbly. (Cooking time may vary slightly with microwaves.) Do not let it burn. ( I cook the mixture for 11 minutes in my 1200 watt microwave.)
Remove from microwave, and add butter, combining thoroughly until completely melted. (I like to cut the butter into smaller pieces, to allow it to melt quickly.) Add pecans, and stir to combine.
Drop pecan mixture immediately onto wax paper with a spoon or small measuring cup.