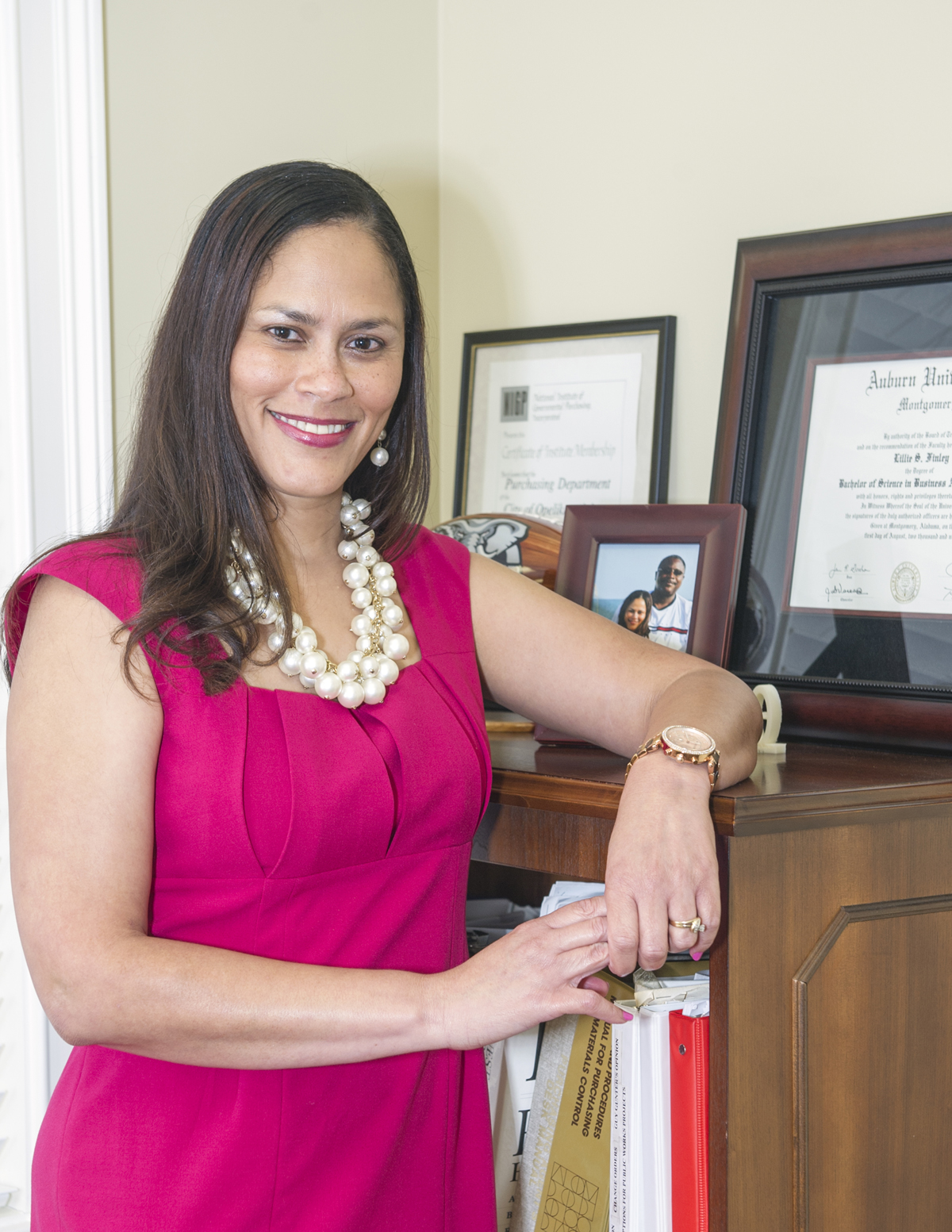 Lillie Finley’s Opelika roots run deep. Finley has spent her entire life living, going to school and working in the area.
A 1988 graduate of Opelika High School, Finley began working for the city of Opelika in 1992 as a court magistrate, being tasked with issuing warrants and bonds, and assisting city judges with their duties.
In 1996, Finley was transferred to the city’s revenue department. Relatively unexperienced with accounting math, Finley said her new job helped her discover her talent in that field.
“When I started working there, my interest in accounting math was piqued…especially dealing with the different formulas and all,” Finley said.
At this point in her career, Finley was already working full time and married with children, but she managed to juggle college classes too, starting her college career at Southern Union in 2001.
Three years later, she transferred to Auburn University at Montgomery to finish her bachelor’s degree. Even though she had to balance school, work and family, Finley said her husband and mother were big reasons as to why she was able to succeed.
“My husband, who was  Chief of Police in Camp Hill, had a fairly flexible schedule. So, more often than not, he could be off to watch the kids when I wasn’t home,” Finley said. “It was hard, but we got through it.”
In 2009, she finished her bachelor’s degree at AUM, and moved on to pursue MBA and MPA degrees from Troy University in 2012 and 2014, respectively.
After finishing her bachelor’s in 2009, Finley was promoted to revenue officer, a position she held for four years before receiving another promotion of sorts.
“In 2013, our purchasing agent, Shirley Washington, retired. The city decided to combine the revenue officer and purchasing agent positions, and I officially became the city of Opelika’s purchasing manager,” Finley said. “I found that time management was the most important way to be able to balance all these new tasks, but still had to come in early and leave late from time to time.”
Finley’s official title became Purchasing/Revenue Manager, and she added several new tasks to her job.
“We put out solicitations for bids, process purchase orders and handle the city’s surpluses…those are my duties as purchasing manager now,” Finley said.
The actual purchasing process for the city is complicated, and according to Finley, consists of several steps.
“Anything that costs under $15,000, all the city departments can purchase. But what they have to do if it’s not a sole source is get three quotes, and we will go with the lowest responsible quote,” Finley said. “They’re put on requisition for that purchase. The department manager has to approve the purchase, then accounting has to approve it, City Administrator Joey Motley has to approve it and then the Purchasing Department turns the requisition into a purchase order and issue it to the vendor.”
Finley said she spends her spare time reading historical books and spending time with her family.
In reflecting on her nearly 24-year career, Finley attributed her rise in the ranks to the city she works for.
“The city has a tuition reimbursement program that city employees can take advantage of, and I’m grateful for a program like that, which helps with advancement. It helped me so much,” Finley said. “Also, I believe my hard work and dedication helped me, as well as Mayor Fuller, who was able to see and recognize that in me.”
Currently, Finley said her future plans are to keep working for the city and finish her Ph. D. in Public Policy and Administration with a concentration in Local Government Management for Sustainable Communities.
When asked about what she thinks is her impact on Opelika, Finley maintains that providing fairness is quintessential to a government job like hers and is something she strives for daily.
“Whenever I come in contact with a customer or taxpayer, I want them to be able to say they were treated fairly. That’s how I hope I make an impact here in Opelika,” Finley said.