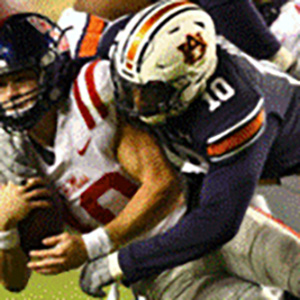 If you look up sophomore slump in the dictionary, a picture of Baker Mayfield will appear. For second year Auburn players, they will aim to build on their freshman campaign and avoid the unfortunate association with the former Oklahoma Sooner quarterback. SEC Freshman of the Year Bo Nix leads the way for the Tigers’ sophomore standouts, but there are a number of other young talents who will get game time for Auburn this season.

Here are three sophomores who can make a big impact for the Tigers in 2020.

Nix won the starting job in the spring of his first season on the plains, beating out the highly touted, dual-threat quarterback Joey Gatewood. Gatewood has since transferred to Kentucky and Nix is the clear starter for Auburn in 2020. Last season, he threw for 2,542 yard and 16 touchdowns – both Auburn freshman records. He also showcased his versatility, rushing for 313 yards and seven more scores on the ground. Nix led the Tigers to a 9-4 record and, in case you forgot, a legendary 48-45 win over Alabama in the Iron Bowl. If circumstances were normal, it wouldn’t be shocking if Nix never lost a game in Jordan-Hare Stadium again. He has already shown his potential in a multitude of games; his best coming against Mississippi State in week 5 when Nix completed 76.2% of his passes for 335 yards and two touchdowns. He also ran the ball seven times for 56 yards and another score. Still, he had his freshman moments. Most noticeably in Death Valley against Florida and LSU. Nix completed just over 42% of his throws and had one interception with negative 16 yards rushing in Death Valley. The Tigers will need more consistency from Nix in 2020, especially on the road. The last quarterback to start for Auburn in three consecutive seasons was Brandon Cox from 2005-07. He beat Alabama all three years. It’s easy to imagine Nix relishing in similar success and potentially becoming the fourth Heisman Trophy winner in program history.

Coming out of high school in 2018, Pappoe was the top-rated inside linebacker in the country. That reputation was put to the test immediately as he started every game for the Tigers as a freshman in 2019. He played well, finishing sixth on the team in tackles with 49. Pappoe’s twitter handle is “TheFreak,” and is an accurate alias for the athletic 6-foot-1, 222-pound linebacker. Another year learning Kevin Steele’s defense and gaining mentorship for K.J. “Downhill” Britt can only benefit the former High School Under Armour All American. Before linebacker Chandler Wooten announced he would forgo the season due to COVID-19 concerns, Lindy’s Sports ranked Auburn’s 2020 linebacker group the best in the SEC. Pappoe and company will lead the revamped Tigers’ defense and should be more than prepared to make up for Wooten’s lost production.

Boobie Whitlow led Auburn in carries and yards in both 2018 and 2019. Williams is the man in line for the starting job with Whitlow gone. However, It won’t be easy. Williams is part of a crowded backfield that features two highly touted freshman runners in Mark-Anthony Richards and Tank Bigsby. Shaun Shivers can change the game with one snap and has every right to be clamoring for carries. Harold Joiner is down on the depth chart but will expect snaps as he played well in a pass blocking and receiving role in 2019. All of the running backs have different strengths but Williams is solid everywhere – indicated by his 4.6 yards-per-carry average. It wouldn’t be surprising if Bigsby surpasses him in total carries by years’ end, but if he doesn’t, Williams will have made the leap from solid to spectacular.

1. Derrick Hall – Buck: Last season, Hall served primarily as the backup to eventual second round pick Marlon Davidson. He saw consistent playing time however, finishing with 13 tackles, 1.5 for loss. Those numbers are hardly impressive but the Tigers had two standout playmakers on the defensive line in Davidson and Derrick Brown. Hall has big time potential and will be one of the many defensive linemen Kevin Steele employs in an attempt to retain the disruptive ability of last year’s unit.

2. Nehemiah Pritchett – Defensive Back: The second starting defensive back position is up for grabs. Pritchett appears the closest to claiming it. The 6-foot-1, 177-pound corner played in six games his freshman season but failed to have much of an impact. He will have a leg up on his competition as JUCO transfer Marco Domio does not yet know Kevin Steele’s system, and Senior Devan Barrett is a converted offensive player.

3. Jaren Handy – Defensive Line: Like Hall, Handy has the potential the step up for the Tigers in 2020. The 6-foot-5, 252-pound lineman looks the part of dominant SEC defensive end. He saw action in seven games in 2019, making seven tackles. He will most likely backup Big Kat Bryant but expect Handy to get a look in. For Auburn’s defense to remain elite, somebody not named after an oversized feline has to step up and Handy could be that guy.