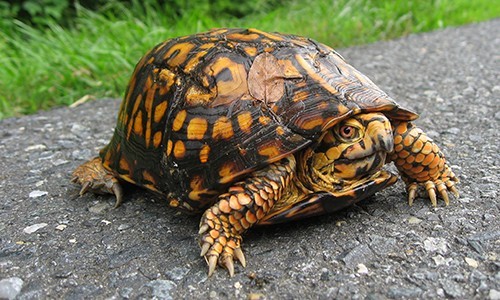 Was that a turtle I heard?

For, lo, the winter is past,
The rain is over and gone;
The Flowers appear on the earth;
The Time of the singing of birds is come,
And the voice of the turtle is heard in our land
Song of Solomon, 2:11-12

OK, I know it’s a turtledove and the dove got lost in translation, but I’m a King James Version guy. It sounds better. (Besides, as my Sunday school teacher, Miss Kling Dacy, told us after she read the verse, “if God wanted to give turtles a voice, he could.”  So there.)
But I’m not here to write about turtles, or doves, or Miss Kling (though one day I probably will). I’m here to write about spring in the South.
It’s coming. I know it. Last week my eyes started to water, my throat got scratchy, and my nose began to run. And corporate America, sensing my growing misery, began telling me (via TV commercials) of all the wonderful things I can take to make Spring go away. And being a good citizen and a committed capitalist, I’m taking ’em.
Feeling better. Thanks for asking.
But post-nasal drip notwithstanding, I love Southern springs — especially early spring, when those first flowers push up to remind us of things past. Ride around town and see paper narcissus and jonquils scattered about in vacant lots where once there were homes and people. Venture into the countryside and catch the outline of a long-gone house defined by daffodils where, years ago, a farm wife put out bulbs to add a bit of beauty to her life. Wisteria filling the air with perfume. And forsythia (or “switch bushes” as they were called in families where the parents knew nothing of Dr. Spock or “positive encouragement,” except to say that “if you do that again I’m positive I gonna cut one of them and lay some encouragement on you.”)
But don’t get too used to it. February thaws often lead to March freezes, or worse. Like twenty-three years ago. It was about this time, with nature in her glory, that my son was born. We brought him home and a couple of weeks later there was over a foot of snow on the ground. The most snow I had ever seen in my life and more than I ever want to see again. So, like any good Southerner should, I look on early spring as a guilty pleasure, one to be enjoyed, but not too much.
Which is what I almost did back in the mid-70s, when I called my buddy Jim who was teaching in a college in Iowa. Now Jim was from Georgia and the only reason he was in Iowa was because Iowa offered him a job. (But let me say this about Iowa, it must be a pretty good state, education-wise, because his college hired him to teach Southern history. How many Southern schools hire Midwesterners to teach Midwestern history? Not that they should.)
Well, it had been one of those wonderful late February days, bulbs were blooming, buds were budding, the earth was squishy under your feet, and the air was full of damp delights. And Jim was in Iowa.
So I figured it was my Christian duty to call him up, remind him of how things were down here, needle him a little, so I did.
His wife, Lyra, came on the phone.
“Let me speak to Jim.”
“He can’t come right now. Our gutters froze over, one has already come down, and he is up on a ladder trying to save the others. And it’s 10 degrees. Can I have him call you back?”
Now I could have told her “No, just tell him that it is over 60 here, birds are singing, and kids are already playing baseball.” Or I could have said, “Sure, tell him to call when he gets down.” And when he did I could have described, in detail, the dandy day he missed by being up there.
But friends don’t do that to friends. In cases like this, friends lie. Which was what I did. “No,” I told her, “just tell him that we are in the middle of an ice storm and I wanted to see if things were as bad in the North.”
There was no reason to remind Jim what a Southern spring was like. Anyone who has lived through one remembers and can’t wait for another. And a few years later Jim took a job in Mississippi – which he knew was the right decision, he told me, when the feeling returned to his fingers and toes.
And he is in the South still, just like me. And I bet, right now, he is listening out for that turtle.
Just like me.
Harvey H. (“Hardy”) Jackson is Professor Emeritus of History at Jacksonville State University. He can be reached at hjackson@cableone.net.