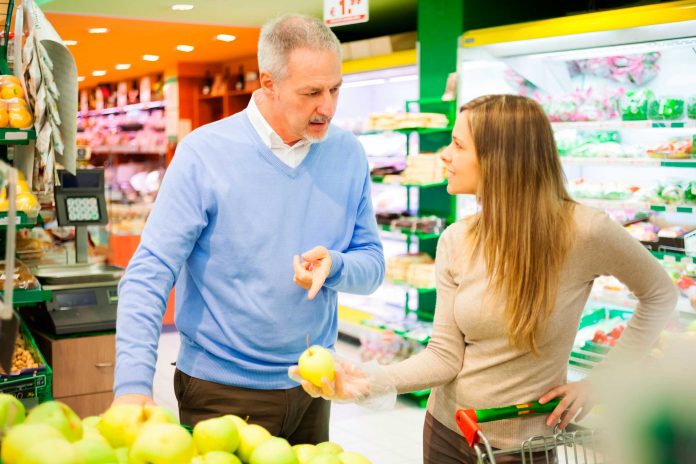 Winn-Dixie—they remodeled this store not long ago. It’s something else. A little too fancy, if you ask me.
I’ve been shopping here since the old days. Back then, it was your average supermarket. Linoleum floors, decent beef, clinically depressed cashiers.
Today, they have deli counters that sell salmon sushi. I’d rather lick the restroom floor than eat salmon sushi.
The woman behind me in the checkout line is old. She is frail, with white hair, and big glasses. She is every American granny you’ve ever seen. I’ll bet the closest she ever came to sushi was a wild night at the Baptist clothing swap.
She is holding onto her daughter for support.
Her daughter is Hispanic—black hair, dark skin, late fifties. The two women couldn’t look more different.
They have a full cart. They have purchased all the usual supermarket fare. Chicken, tuna cans, jars of peanut butter, Duke’s mayonnaise, Colonial Bread, and enough paper towels to sink the U.S.S. Uruguay.
We make friends.
The old woman tells me about herself.
She adopted her Hispanic daughter when the girl was three. The toddler had been abandoned at a shopping complex. The child didn’t understand English, and she was sick with a chest infection.
“She almost died,” the old woman says. “I had to do something to help.”
The old woman met the girl at a foster facility. Some of the her church friends used to visit local foster homes to give attention to needy children.
“There were only a few of us who did that,” the old woman goes on. “We were so young. We’d hold the babies, play games, read stories, sing to’em sometimes. You know, mom stuff.” Mom stuff.
“Kids need touching to survive,” the lady adds. “It’s been proven. Look it up.”
I’ll have to do that. Anyway, she couldn’t put the toddler down. She held the sick girl in her arms until her elbows froze. She visited the girl several times per day to hold the child.
And as fate would have it, the child started to get better. The doctors said the affection was working like magic.
After the baby recovered the motherly attention didn’t stop. She adopted the girl and brought her home.
“People thought I’s crazy,” the old woman says. “They all told me: ‘You’re not even married, you don’t have kids, you don’t even know what you’re doing. But I told them all where they could—”
Our conversation is cut short. It’s time for Granny to pay for her grocery bill and our chit-chat is holding up the line.
Even so, Granny decides to tell the rest of her tale.
The man in line behind me gives me dirty look.
Take a number, pal.
Eventually, the woman got married. He was a kind hearted man who worked on air conditioners. He took care of his girls. He was a good father. She was a good mother.
The Hispanic woman removes a cellphone and shows me photos of the family. In the image is a man and woman with a Hispanic fourth-grade girl on their laps. They are overflowing in the happiness department.
I follow the ladies to their car and help them load a few bags.
Daughter helps Granny into the passenger seat. Granny kisses her daughter on the cheek, but isn’t ready to finish our story. Her daughter insists.
So Granny says:
“This beautiful girl made me a mother. If you write a story about us, make sure you write about how absolutely breathtaking she is.”
Her daughter shuts the door and says, “Sorry, we didn’t mean to talk your head off. My mom is a talker.”
Don’t be silly. It was the highlight of my day.
By the way, you’re breathtaking.
Sean Dietrich is a columnist, and novelist, known for his commentary on life in the American South. His work has appeared in Southern Living, the Tallahassee Democrat, Southern Magazine, Yellowhammer News, the Bitter Southerner, the Mobile Press Register and he has authored seven books.