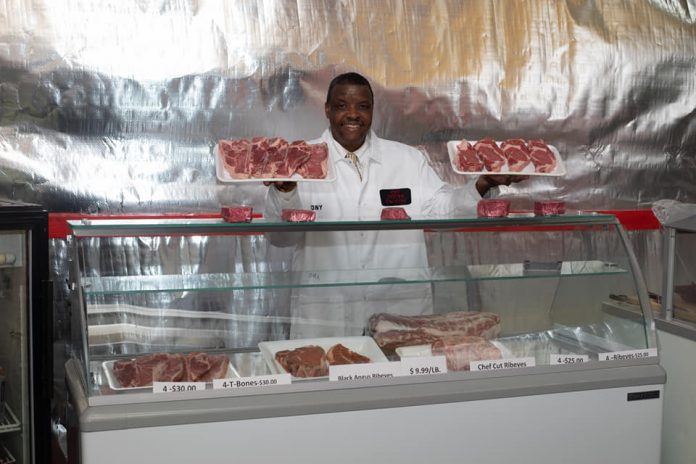 After more than a year of being closed for repairs and renovations, The Steak Factory on Frederick Road has reopened and is ready for business, according to owner Anthony Cleaves.
On Sept. 27, 2018, a female driver experienced medical complications and passed out at the steering wheel, approaching the building at 75 mph without braking.
“I had just finished an order for my customer and was in my office when she came on through, just a few feet away from me. I lost years of tax records, pictures and important documents … but most importantly, about $80,000 worth of equipment,” Cleaves said. “Thankfully though, it was just the walls that got damaged … there was little to no structural damage.”
The last 11 months saw Cleaves balance working toward the re-opening of The Steak Factory, managing his online sausage and seasoning business as well as catering. He officially reopened his 1413 Frederick Road storefront at the end of September, resuming his regular hours of 9:30 a.m. to 5:45 p.m. Monday through Saturday.
“People are still trickling in, and I just gotta win them back that now we’ve reopened,” Cleaves said.
Cleaves hails from Lee County. He is a 1983 Beauregard High School graduate and has bachelor’s degrees in marketing and transportation management from Auburn University.
While in college, Cleaves worked in grocery stores to help fund his education. He briefly worked in the trucking industry before returning to the grocery industry as a manager at stores around the Chattahoochee Valley area.
Noting the profitability of meat departments within grocery stores, Cleaves decided to open his own business in 2005. He would own and operate “The Meat Store” for the next seven years from his Second Avenue location before closing down in 2012.
After several more stints in the food and grocery industry during the next four years, Cleaves saw a blueprint for how a steak-rib centric business could succeed, setting the opening of The Steak Factory into motion.
“In the meat department of most grocery stores, ribs and steaks are your main revenue producers. I knew if I narrowed down my selection and focused on steaks and ribs that I could make it work,” Cleaves said.
Since opening The Steak Factory in 2016, Cleaves said he has built a devout following. He said the two most satisfying aspects of running the business are the opportunities he has to build lasting relationships with customers and provide them with some of the freshest cut meats in the area.
“The meat I source is the same as what you would find (in major retail grocery stores), but I can cut you exactly what you want, and there’s really no wait time. I can generally cut and get your order ready right on the spot,” Cleaves said. “If you value freshness and specific cuts, then come to The Steak Factory. I’m also there for my customers if they have any wants or needs.”
In the next three years, Cleaves hinted that he has plans to relocate The Steak Factory to downtown Opelika.
For more information, call 334-734-0144 or like and follow The Steak Factory’s Facebook page.