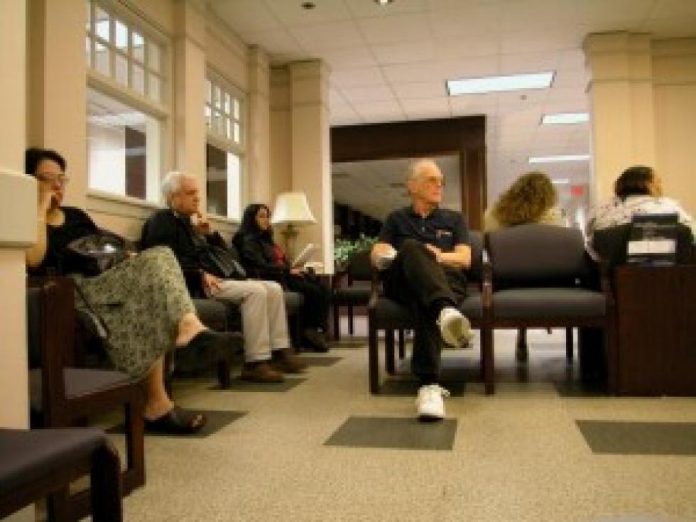 The television in the doctor’s office is blaring news headlines. It plays disturbing footage, followed by politicians who explain that the world itself is crumbling.
The people in this waiting room watch the TV. Most are sick. If you close your eyes, you’ll hear hacking and coughing.
Welcome to the Fifth Circle of Waiting-Room Hell.
The woman beside me is dog sick. On my other side is a boy with a snotty upper lip. His cough sounds like a ‘67 Buick Roadmaster on a cold morning.
I move to the other side of the room, away from people who look like they’re about to write their own obituaries. I sit next to a man whose eyes are closed.
He hears me.
“Hello,” he says, without opening his eyes.
His name is Dan. He’s blind.
Dan wears a smile on his unshaven face. He shoves his hand in my general direction and we shake. We start talking.
The television overhead is loud enough to drown us out, but we manage.
“I play guitar,” Dan says. “I’m not very good, but I play. Thinking of learning piano, too. My wife bought me a keyboard for my birthday.”
His wife is beside him, reading. Silver hair. Lines around her eyes. “He can do anything,” she says. “He even drew a portrait of me.”
Dan tells me that he printed a photo of her. She pricked holes into the paper with a needle, outlining the facial features. Then he traced. His wife shows me the portrait on her cellphone. The word impressive comes to mind. Dan also tells me he had a dream a few nights ago.
“It wasn’t just any dream,” he says.
It was a visual dream. The first time he’s seen anything since age two. At least he thinks he saw something. Truth told, Dan doesn’t even remember what it’s like to see.
“My dreams have always been just sounds,” he says. “But not this one. I saw a color or something. It was big. And I think it was blue.”
But he’s not certain.
“I could’ve stared at it all day,” he says. “I think maybe I was seeing the ocean.”
“Or the sky,” his wife suggests. Dan makes a big smile. “Whatever it was, God, it was beautiful.” Beautiful.
Before we finish talking, the nurse calls his name. He stands and shakes my hand. “I’ll be seeing you,” he says, then he laughs at his own joke.
His wife rolls her eyes. Dan places both hands on her shoulders. She leads him to the back room. He shuffles behind her.
That was a few hours ago.
While I write this, I’m sitting on sand, overlooking the Gulf of Mexico. I have a head cold, my sinuses are packed, but the doctor said I’ll survive.
There’s a seagull beside me, hopping back and forth. Two kids throw a football. The sun is shining.
And I just did an experiment, right here on the beach.
I kept my eyes closed for thirteen minutes straight, just to see what it was like.
Thirteen minutes. I listened. There were no horror-stricken headlines. No talk of evil. No sadness. I only heard birds, the loud surf, the sound of couples laughing. I tasted the salt air.
And when I opened my eyes, I saw it. So help me, I really saw it. It was everywhere, stretching toward the edge of the world. It was big. It was blue.
My friend was right.
This world is beautiful.
Sean Dietrich is a columnist, and novelist, known for his commentary on life in the American South. His work has appeared in Southern Living, the Tallahassee Democrat, Southern Magazine, Yellowhammer News, the Bitter Southerner, the Mobile Press Register and he has authored seven books.