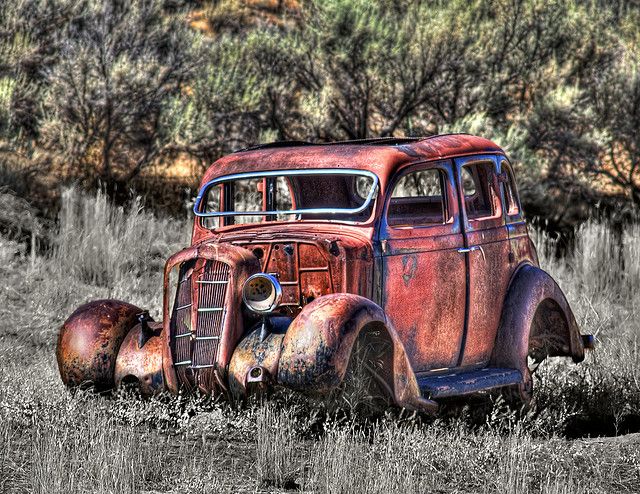 By Bob Sanders
It looked so lonesome, standing there all by itself. I ran across it in an old Life magazine. It’s a picture of the last civilian car to roll off the assembly line before all the car manufacturers switched to wartime production, making  tanks and trucks and airplane engines and the like, in 1942.
After the war, Pontiac jumped back into car production. Daddy owned one andliked it very much, a big step from the Fords and Chevys and Plymouths he had owned before it.
Pontiac was a brand that would last forever. I owned one, of course, pastel yellow, from the Canon Motor Company (editor’s note: the Canon Motor Company was located on First Avenue between North Seventh and North Eighth Streets). Then, suddenly, out of the blue, GM dropped Pontiac from their line of cars, along with Oldsmobile. I owned one of those, too.
True, the cars had become duplicates of one another, so, blap, they were gone. GM had a “growing family” philosophy for many years. The young family would sfart off with a Chevy. Then, as times got better, the family would move up to a Pontiac, then to an Oldsmobile, then go to a Buick. Then, finally, if they really hit the big time, they’d get a Cadillac, which was the generic word for having it made.
Yes, Same way with Chrysler. For the last several years, Dodge and Plymouth had been identical except for the chrome. But, did they have to go and drop Plymouth? It was one of the big three in sales for decades. The first two cars Daddy owned, after the pickup, were Plymouths. We had a Plymouth when the Big Snow came. Alas, it’s gone forever, along with the De Soto.
Ford was a little different. For years, there had been Ford at the lower end and Lincoln  at the top with nothing in between. One day, Edsel Ford got up his nerve and approached old man Henry with an idea: Don’t we need a car in between to kind of offer s choice to the GM and Chrysler mid-range cars?
Henry said, “OK, mess around with it if you want to, or something like that. Aha. So Edsel got together with the designers and engineers and came up with this idea. They took an ordinary Ford and lengthened the wheelbase by four inches (for a better ride) and tweeked the old reliable flat top Ford V-8 from 85 horsepower up to 95 and made the interior a bit plushier, and put the prettiest grill on it a car ever had, and … viola! … they had the 1939 Mercury! All right. So it was just a Ford on steroids, but there was something special about it.
My brother tells the tale:
Daddy was a good trader, His idea was, never feel like you have to trade. He be casually looking at some cars. When the seller or dealer would start talking , Daddy would make an offer for a certain car that was plumb embarrassing to me, it was so low. That’s my offer, take it or leave it, and, … then he’d leave! Be dad-blamed if they wouldn’t later call him up, ready to trade.
One time Daddy was dickering with a guy about a Mercury. Brother Jack was almost wetting his pants in anticipation of getting to drive a Mercury, while fighting off platoons of beautiful girls who would want to ride in such a car. On and on they offered and rejected and offered. Jack says they got within five dollars and neither would give anotjer inch. So we never owned a Mercury.
Daddy owned a Buick when he died, Mother drove it until it literally rusted or corroded away. Her driving of it became the material of legends. With her eyes just barely higher than the dash board, she drove around, mainly to the beauty parlor and to Mt. Pisgah. Intersections? She never understood that you were supposed to stop at some of them. Fortunately, the natives knew her and her driving and THEY stopped.
I miss the great car names, the ones we’ve mentioned plus the Hudson, the Studebaker, Packard, Kaiser, Nash and others.
They all contributed to the war effort, and then, they died. Bye, y’all.