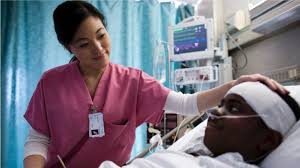 A frozen yogurt joint. I’ve just finished supper. My belt is tight from eating too much pizza.
There are too many yogurt flavors to choose from in this place. Triple Dark Peruvian Fudgesicle, Very Berry Quite Contrary, Oreo Delight, Midnight Mudpie in Mississippi—shut my mouth.
Of course, the Orange Julius flavor doesn’t taste too shabby, either.
Then again, artificial orange doesn’t always set well with me. When I was a boy, the doctor gassed me with orange-flavored laughing gas just before tonsil surgery.
All I remember after that is hearing nurses play Righteous Brothers music through a transistor radio while I breathed in orange fumes.
Ever since then, I detest Sunkist, and I can’t hear “Unchained Melody” without breaking into a nervous sweat.
So I’m sampling yogurt flavors, and that’s when I see her. She’s 12, maybe 13. She’s with her family. She is small. She is a redhead.
I have a soft spot for redheads since God made me one.
The girl is feeding her little brother with a spoon. The boy has a cast on one arm, and a sling on the other.
“He fell,” the boy’s father explains. “He was climbing our gutter on the porch.”
“The gutter?” I say.
“The gutter.”
He broke one arm and injured his other shoulder. No sooner had he hit the ground than his twelve-year-old sister came running to the rescue.
And as the story goes: she carried her brother indoors—over her shoulder. Big Sister has been caring for Little Brother ever since.
“I love taking care of people,” the girl tells me. “I’m gonna be a nurse one day.”
The girl’s mother says that her daughter has always wanted to be a nurse, from day one. And earlier this year, before little brother attempted his solo flight, the girl got her chance to be a real nurse.
It happened when her grandfather was diagnosed with skin cancer. After his invasive surgery, recovery was slow. So, the girl volunteered to live with her grandfather for three weeks.
Three weeks. That meant no hanging out with friends, no sleepovers, no going out for movies and frozen yogurt. It was twenty-one days of caregiving.
When I ask the girl about it, she only shrugs and says:
“Sometimes, you just gotta do what you gotta do.”
She changed his bandages, cooked his breakfasts, fixed his lunches, dusted his furniture and even mowed his lawn.
I haven’t cut my own lawn in 30 years.
“That’s when we realized she was special,” says her father. “She came home one day, saying, ‘Dad, I wanna be a nurse.’ And I was like, ‘A what? Who is this small adult, and where’d she come from?’”
And that brings us to the aforementioned incident, when her little brother tested the weight-bearing capabilities of residential gutter, only weeks ago. Due to his accident, she is a nurse once again.
A girl’s gotta do what she’s gotta do.
So I’m watching her feed Little Brother one mouthful at at time. She dabs his chin. She tells a joke. She is trying to make him laugh.
Her brother will make a full recovery, her parents tell me. And one day, he might even pitch in the major leagues—if all goes according to the plan. But until then, he has big sister.
And it’s my turn to order. Before I do, I ask for expert yogurt-flavor advice from the girl, but she’s too preoccupied with little brother to hear me.
So I ask junior himself which flavor he recommends.
“Get the orange,” says the the boy. “That’s my sister’s favorite, she knows everything.”
Why not. Orange it is.
The family finishes their yogurt cups. They leave. They walk through the parking lot. I see them beneath the glow of the street lamp.
Sister wraps her arms around her brother and muscles him into a giant SUV. She buckles him into his seat. She kisses his face. I watch their tail lights disappear.
I was going to write about something else tonight. But I’ve changed my mind.
Sometimes, a boy’s gotta do what a boy’s gotta do.
Sean Dietrich is a columnist, and novelist, known for his commentary on life in the American South.