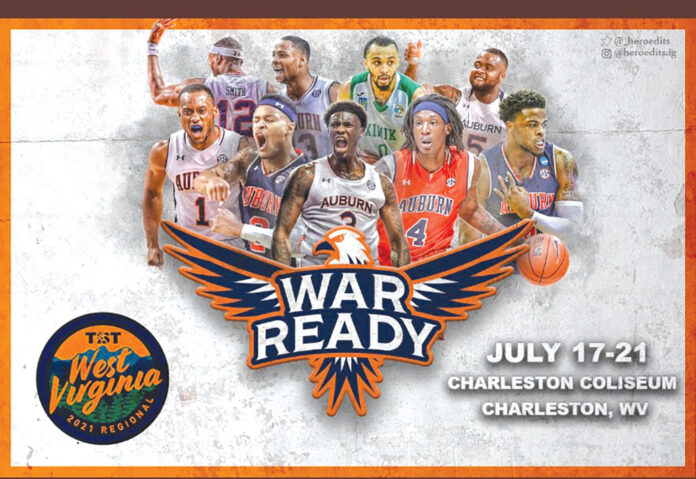 This summer, 10 notable names of recent Auburn basketball history have joined together to compete in The Basketball Tournament (TBT) –  a winner-take-all single elimination basketball tournament with a $1 million grand prize.

A core of former Auburn players (Bryce Brown, Horace Spencer, Desean Murray and Laron Smith) participated in TBT with team “War Tampa” in 2020, however, this year, more former Tigers have been recruited and team “War Ready” is prepared to represent The Plains this year.

“Our Twitter went from like 300 followers to like 4,000 last summer, just because we had four Auburn guys on our team,” said General Manager Matt Moschella. “So then, this year, talking to those guys and talking to the tournament a little bit, they thought it was best to go to an Auburn alumni team.”

Dollard, who came back to Auburn to finish his degree in 2016, said he grew close to some of the players on that year’s Auburn team. When he was approached to be on War Ready and saw some of the guys from 2016, committing to play was an easy decision.

“I thought it would be good opportunity for me to join those guys, have some fun, play some basketball and reach a common goal together,” he said.

Despite War Tampa’s disappointing first-round exit in last year’s TBT, the big names on War Ready are driving more engagement from Auburn fans – who are bringing their high expectations with them. Moschella is looking to a few of the guys to lead War Ready through the hype.

“I have to go with Laron because he’s been in TBT for four years now with us. He knows what it takes to win this tournament you know the sacrifices and stuff like that.”

Another guy Moschella expects to play a crucial role is the 6-foot-7, physical presence that is Cinmeon Bowers.

“He’s been in the championship game in this tournament on the Golden Eagles a couple years ago. So, he sees the sacrifices you have to make. He expects to play anywhere from five to 25 minutes. You have to have guys like that, people have to take sacrifices and play defense. That’s what we are trying to install here, and Cim has been helping us tell all these guys who are new to TBT about that.”

“It seems like our style is going to be sort of how Bruce Pearl does – running and gunning and shooting threes. We want threes instead of layups.”

Dollard, who said he thinks he brings leadership, scoring and rebounding to the team, expects War Ready to play “gritty”.

“I expect us to be a grind-it-out type of team that is gritty getting it done on the defensive end – its going to take a lot of teamwork,” he said. “We got some scorers, some shooters …  Probably not the biggest team in the tournament, but I think it’s a lot of heart over height. At the end of the day, its basketball, and the guys love to compete and love to win. We are going to try and get it done.”

War Ready has plans to practice in West Virginia, where its regional is being played, the week before TBT starts.

They are the No. 5 seed in the West Virginia regional and will be preparing for a first-round matchup against the ETSU alumni team, the Bucketneers, on July 18 at 11 a.m.

As of now, the roster is complete. However, Moschella did not close the door on the opportunity of adding another big name.

“From now on, any player we would add would be $1,000,” he said. “But if someone from those final four teams pop up then we would have to probably pay for them to get on, but I’m sure the fans would help us cover those prices. But we like what we have unless something really special comes up or someone backs out.”

TBT began in 2014 and gained publicity in part because of the Elam Ending – which shuts off the game clock at the end of the game and instead sets a target score to determine the winner. “It makes the game a lot more intense,” Moschella said.

If the TBT’s unique format is not enough to pique interests, watch for the college basketball nostalgia.

“It’s those people you remember in college, that they didn’t make it to the NBA, and you’re like, ‘Oh snap, let’s see how they are doing,’” Moschella said.

With just a few more weeks before tournament begins, Moschella said there is only one focus now: getting there healthy.

“It’s tough to tell grown men not to do anything,” Moschella said. “But a lot of them know the sacrifice and they want to play together and want to represent Auburn again, so we will be definitely be good to go.”

All games will be shown on ESPN and the schedule is as follows: