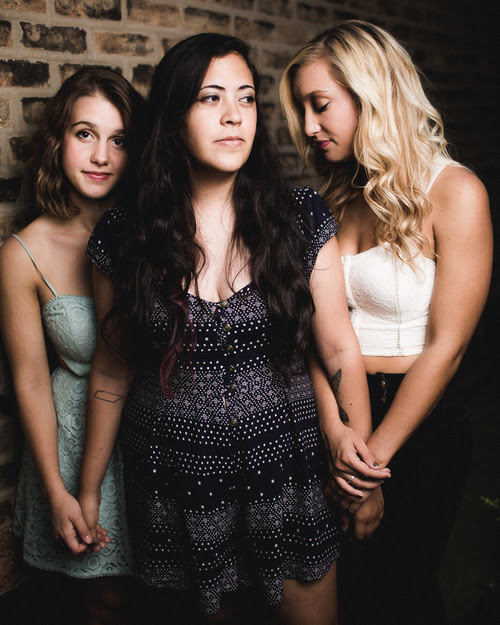 Sundilla will welcome Maybe April to town Sept. 7. Advance tickets are $12 and can be found at Spicer’s Music, Blooming Colors, World Cup Coffee and online at sundillamusic.com; admission at the door will be $15. Showtime at the Auburn Unitarian Universalist Fellowship will be 7:30 p.m., and there will be free coffee, tea, water and food, and attendees are welcome to bring whatever food or beverage they prefer.
Maybe April is a Country Americana trio made up of Kristen Castro, Katy DuBois (Bishop), and Alaina Stacey. Hailing from Simi Valley, California, Jonesboro, Arkansas and Chicago, the three met in summer 2012 at a music industry camp in Nashville.
They wrote a song that would later take them to Los Angeles to play at a Grammy week event, along with Bonnie Raitt, Kris Kristofferson, Gavin DeGraw, J.D. Souther, Joy Williams from the Civil Wars, and many others.
Since then, amongst hundreds of shows, the girls have opened for Brandy Clark and Sarah Jarosz, played Pilgrimage Music Festival and IBMA’s Wide Open Bluegrass Festival, and had their video “Last Time” premiered on CMT.
“I first heard of Maybe April shortly before attending the 2018 Folk Alliance International conference in Kansas City last February,” said Sundilla organizer Bailey Jones. “I had seen one of their promotional videos, and that was enough to convince me to catch their official showcase. Obviously, I wasn’t the only person who had that thought; many promoters had Maybe April on their must-see list. I feel fortunate that I was able to talk with their booking agent; he was a popular guy after their performance.”
Maybe April is recognized for their three-part harmonies, strength as instrumentalists, original songs, and shared roles as frontwomen, each adding something different from their musical backgrounds to create a unique sound.
They trade lead vocals, as well as instruments, with the ease that some groups that have been together for decades would envy.
The appeal of Maybe April is multifaceted: The lustrous harmonies of the voices; the appealing mix of their personalities; and their winningly under-amplified sound which lends their performance an almost acoustic quality.
Those songs are a mix of country/folk-Americana/indie sounds and feature sophisticated lyrics that suggest the glowing beauty of this trio of feminine souls hides a certain amount of heartbreak and worldliness, though not the loss of a romantic spirit.
This concert is sponsored by Scott Hanson of Realty South, and his wife Sarah Hendricks.
For more information, please contact: maybeaprilmusic@gmail.com.