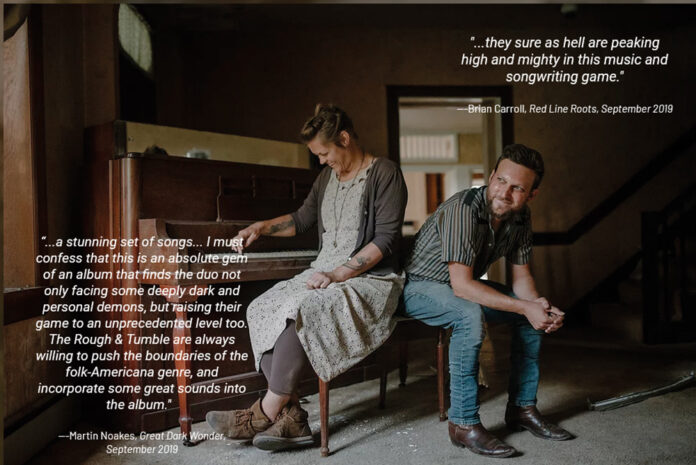 The Rough & Tumble return to Sundilla to kick off the 2022 season on Thursday, Jan. 13. Showtime at Pebble Hill is 7:30 pm. Advance tickets are just $15 and can be found at Spicer’s Music, Ross House Coffee and online at www.sundillamusic.com; admission at the door will be $20.

Five years ago Sundilla brought The Rough & Tumble to town with the prediction that they would “take the stage as unknowns and leave the stage as somebody’s new favorite.” Based on all of the “You can bring these guys back anytime.” comments that were heard after the show, it looks like they were right. Since then, The Rough & Tumble have only gotten better, and have added three new CDs, a Listening Room Artist of the Year award and a SERFA Official Showcase to their already impressive resume.

The Rough & Tumble are as easy to detect as a stray dog on your doorstep — and as difficult to send home. The dumpster-folk, thriftstore-Americana duo, consisting of Mallory Graham & Scott Tyler, have been hobbling around the country in their 16’ camper since 2015, when their Nashville landlord left them without heat during an ice storm for 12 days. Then she tried to hike the rent. Enough was enough, and The Rough & Tumble gave their 30 days’ notice at their jobs and their lease, sold most of what they owned and hopped into their shoddily built camper, in spite of the lot salesman’s advice. They picked up a couple of actual strays along the  way — two  100lb dogs, Puddle & Magpie Mae — and have been making themselves at home in living rooms, bars, theaters and festivals across the country.

“Their Americana music is restorative, their performance highly entertaining, their orchestra of unusual instruments intriguing,  and … jokes and stories are worthy of an HBO special” said Linda Bolton of Cozy Cabin House Concerts.” And Red Line Roots says “… they sure as hell are peaking high and mighty in this music and songwriting game.”