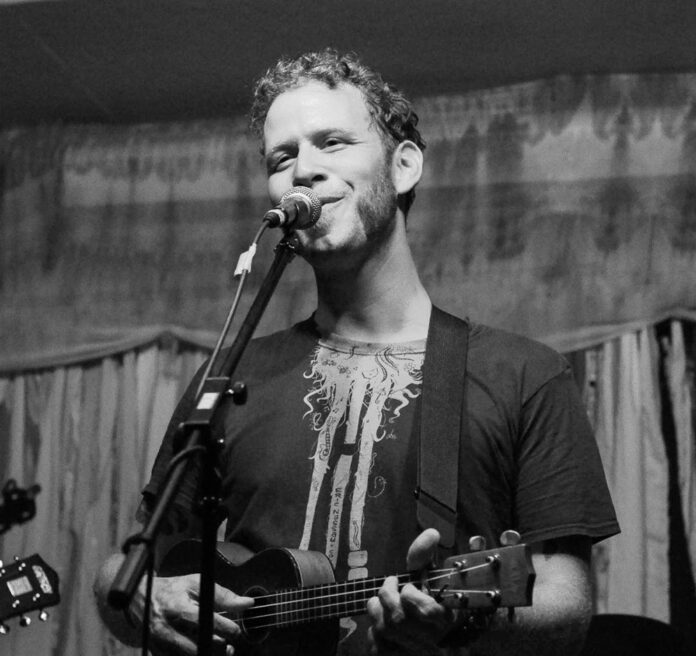 Sundilla will welcome Canadian singer-songwriter Scott Cook to Auburn on Friday, Feb. 4. Showtime at Pebble Hill is 7:30 p.m.. Advance tickets are just $20 and can be found at Spicer’s Music, Ross House Coffee and online at www.sundilamusic.com; admission at the door will be $25.

Scott Cook is the definition of “traveling singer-songwriter;” he has been living out of a van or a backpack for a dozen years now, touring almost incessantly across Canada, the US, Europe, Asia, Australia and elsewhere. That he still finds the time to slow down long enough to record new CDs is amazing, and when he does, he produces works of art. His sixth studio album Further Down the Line won him his second CFMA nomination (English Songwriter of the Year) and comes packaged in a 132-page book containing a look back, in words and pictures, on a decade of full-time travel. He’s currently touring in support of his seventh collection, Tangle of Souls, which comes in a hardcover book of road stories and ruminations.

But the true beauty lies in the songs themselves. A Cook song contains the extra work done by a carpenter who cares. Work the carpenter doesn’t have to do. Work only other carpenters will likely even notice. Lauded as one of the best songwriters Canada has (high praise indeed, since that list would also include the likes of Joni Mitchell, Leonard Cohen, Gordon Lightfoot, Neil Young…) Cook is a working artist who’s taken enormous risks in order to make something which offers strength to anyone who takes the time to listen.

He has been described as “the love child of Woody Guthrie and Steve Goodman.” One of Canada’s most inspiring and imaginative storytellers, he’s a slightly subversive roots balladeer, applying his wry humor liberally to contemporary issues with keenly observant lyrics, some fierce fingerstyle guitar and clawhammer banjo and a warm, rugged voice that keeps you hanging on every word.

This will be Cook’s first appearance in Auburn. Anyone who attends will demand that it not be his last.

Sundilla is a 501(c)3 non-profit organization, with an all-volunteer staff. Started in 1993 with an outdoor concert on the lawn at Pebble Hill, Sundilla started holding most of their concerts in the AUUF Fellowship Hall in 1996, thanks to the generosity of the AUUF. In 2017 Sundilla became the first, and so far only, venue to be presented with a SERFA Award for Contributions to Folk Music by the SouthEast Regional Folk Alliance.

Second Saturday is This Weekend