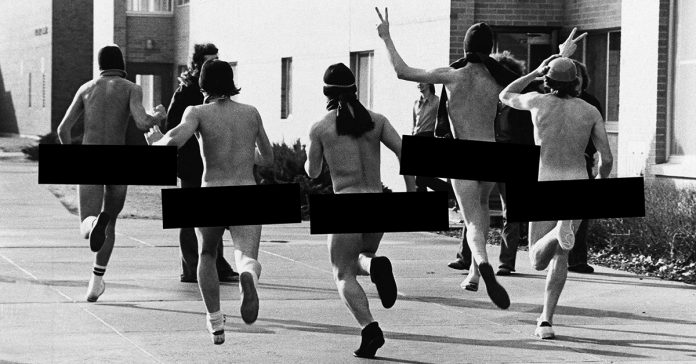 Read the other day about Steve Gough, a 44-year old truck driver who is walking the entire length of Britain, from Land’s End in the south to John o’Groats in the north, wearing nothing but “a floppy olive-green hat, brown hiking boots and navy blue socks.” 847 miles.
All to convince the Brits that nudity is natural – not an easy task considering that “No Sex Please, We’re British” might be a national motto.
Well, being a Southerner and all for lost causes, I am pulling for Mr. Gough – from a distance and without looking. And being a Southerner, I pull for him with my clothes on. Like the British, Southerners are notoriously modest. Or at least we were – up until the 1970s. Actually, until February 1974. That was when a group of Southerners broke down the last barrier that stood between themselves and good taste and took off their clothes – in public.
Though it was still winter, the weather cleared, cold air from Canada stopped above the Ohio River, and the sun broke out to heat the ground. The South is famous for February warm-up, daffodils pushing out, plum trees budding, a false spring that brightens spirits before March comes in like a lion.
It was one of those February days. And because winter had been particularly bleak, Southerners welcomed the warmth like a long-lost friend. There are moments in history when revolutions occur spontaneously, when rebellion rises from the collective discontent and catches the forces of repression unprepared. This was one of those times.
Some say it began at Auburn University. Some say at the University of Georgia. Other schools claim the honor. The one thing the claimants have in common is that they are Southern.
The afternoon was warm and a few male students, full of themselves as young men are, stripped down and ran from one dorm to another. Seeing this as a challenge, other students followed suit without suits. Coeds, emboldened by the Women’s Rights Movement and already having burned their bras (or at least left them in their rooms) threw off what little caution and modesty remained and joined their brothers in the buff.
Afternoon stretched into evening and as the anonymity of night fell more students came out, bared it all, and “streaked” across campus. Soon streaking slowed and students began ambling about in undressed clusters that congregated near the center of campus. At Georgia, a young lady (a pre-vet major no doubt) appeared on a horse – a feat that gave bareback riding a whole new connotation – and led the group in a parade up a hill where students disappeared into dorms and she disappeared into the distance.
The next day university officials issued the order “wear clothes please, we’re Southern” – or something to that effect.
But it was too late. It was a movement. On university campuses throughout the South, students were dropping-trou in the pre-spring rite. It even spread to high schools, where in one instance the future president and CEO of one of Alabama’s most successful firms was nearly expelled for doing what comes natural au naturel.
Now, of course, most students did not take part in this – revolutions are by their nature the work of minorities. However, I firmly believe that even those who watched and cheered, fully clothed, supported the movement and wished they were bold enough to be in it.
Still, there was opposition. College administrators, of course, took a dim view of such doings (professors, being more liberal, we’re less likely to condemn.) Young Republicans snorted that it was just the sort of thing one would expect from students raised on Dr. Spock parenting and Lyndon Johnson’s Great Society. Campus religious organizations also took a dim view of the proceedings, though none ventured to say that their members weren’t involved. Others claimed to see the Lord’s displeasure by the cold front He sent down a few days later to nip the buds and slow the sap He had warmed the week before.
So it followed that by the time spring came for real, colleges were prepared with rules and penalties. Southern students, always respectful of authority, saw little to gain and much to lose challenging the powers-that-be. So streaking faded from popularity and the revolutionaries turned to other things.
But consider this – they are still among us, those boys and girls of February 1974. Enshrined in old photographs and aging newsreel clips, today they teach your children, run your companies, sit in church with you, work to make your communities better places in which to live, and are, in general, solid citizens. Today, you can’t tell them from anyone else.
Good for them. And if you are one of them – good for you.
Harvey H. (“Hardy”) Jackson is Professor Emeritus of History at Jacksonville State University. He can be reached at hjackson@cableone.net.