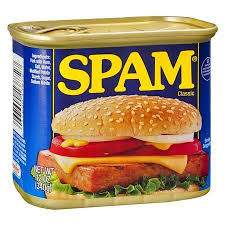 Every morning when I turn on my computer and go to my email, there it is.
Spam
Not the lunchmeat. (My Daddy had so much of it during WWII that for years he refused to let Mama bring it into the house. Then, as time passed and nostalgia settled in, he went out, bought some, and served it to the family to help us understand the sacrifice he made for his country.)
No, I’m talking about the junk-email that gets through the filter and onto the screen.
A few weeks ago I began collecting it, and as I did I began to see emerge a profile of the person that marketers had targeted, and the target profiled was ME.
How did “they” come up with stuff they felt I would want?
In some cases it was pretty easy.
Any researcher worth their salt could find out that I am retired, so I am an ideal candidate for a “Home Based Occupation” into which “they” will set me up – for a fee, naturally. Then I saw that the promotion was addressed to a guy named “Harold,” so I hit “delete.”
Other marketers were a little sharper. One wanted little-old-me to get in on “Medigap,” which would solve all my insurance needs, while another just knew I needed a reverse mortgage to help me through my twilight years. If I didn’t go for that, there was a Home Warranty plan that would cover my dwelling from all sorts of disasters. We elderly watch the Weather Channel and worry about such things.
It is amazing what the Weather Channel has done for our prayer life.
Now if I was really bad off, I could apply for a Federal Aid Package because (I’m not making this up) “the U. S. Government wants to help you” – “you” being “ME.”
When was the last time you heard that?
And believed it?
But wait, there is more.
Somehow Wikileaks got my name, and has sent it out to everyone at home and abroad.
How else could a bunch of “on-line Russian Girls” find me?
One of them looked suspiciously like Melania Trump, another like Rosie O’Donnell. I don’t think I have the security clearance for either.
You have read about the $125 billion waste that the Pentagon reportedly covered up? Well apparently a lot was spent on “Military Flashlights.” Every day I get two or three offers to sell me one or more at a bargain price. So far I have resisted, but if the price keeps dropping I may jump in line.
I am truly amazed at the concern the Spam-Senders have for my health and well being.
Dr. Oz is ready to help you (meaning me) “lose your gut,” while a host of natural remedies are offered to treat whatever ails me – most of which I cannot repeat in this column for The Star is a family newspaper.
But just in case you (meaning me) are not cured by the natural remedies, the National Biblical Association is offering to tell you (meaning me) the “3 Things Jesus Said About How to Cure Disease.”
I bet “see a doctor” isn’t one of them.
Meanwhile, to help you (meaning me) communicate with our growing immigrant population, “Rosetta Stone” is offering all sorts of foreign language courses. Since I have no trouble reading the menu at Los Ranchero or China No. 2 Buffet, I hit delete on that as well.
However, I do pay attention to what comes from The Onion and from The Babylon Bee.
Were it not for The Onion I wouldn’t know that Joe Biden had donated his collection of “classic skin mags” (Playboy, Penthouse, etc) “to those in need during the holidays.”
And if it were not for The Babylon Bee (The Onion for Evangelicals), I wouldn’t have known that Starbucks was coming out with “New Satanic Holiday Cups.” Another example of the mainstream media suppressing the real news.
An invitation “to meet someone special on eharmony.com” is pretty clear evidence that “they” don’t know me like “they” think they do. Come July, I will have been married to that “someone special” for 29 years.
But if I happened to run into a guy “whose wife won’t stop flirting,” I will link him to the “Christian Marriage Coalition” website. They have the answer.
Then, right after the eharmony.com advertisement but just before the Christian Marriage Coalition made its pitch, another ad appeared that promised to illuminate my life.
It was a special “TC 1200 Tactical” Flashlight,” the very one “trusted by heroes, Military, Police, Firefighters.”
“Aircraft Grade Aluminum” with “1200 Max Lumens, a Cree XM-L2 LED Emitter, (and) 5 Modes,” that sucker will light your way wherever you are going.
And you (meaning me) can get one for 75 percent off.
How can eharmony.com compete with that?
Where do I get in line?
Harvey H. (“Hardy”) Jackson is Professor Emeritus of History at Jacksonville State University. He can be reached at hjackson@cableone.net.