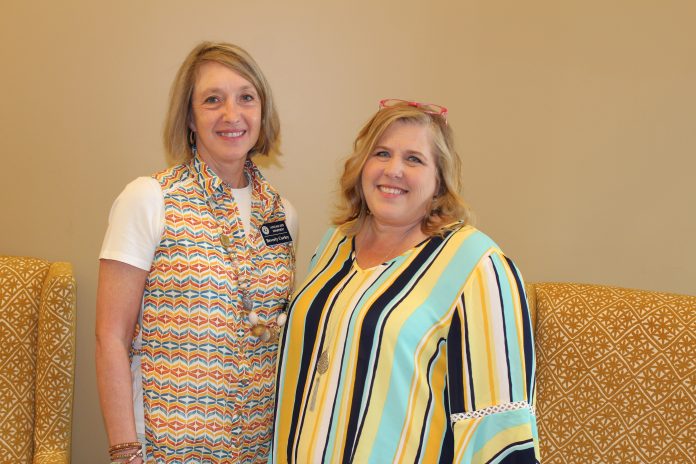 By Ann Cipperly
For the Opelika
Observer

The fourth annual Simply Spring Fashion Show, Lunch and Marketplace was held April 9 in the Southern Room to benefit the Southern Union Foundation Scholarship Program. President Todd Shackett welcomed everyone to the event, and Carol Knight discussed the importance of the scholarship program.
Entertainment was provided by members of the Performing Arts Department at Southern Union, including Jansilynn Kelly, who is Miss Southern, Daniel Smith and Jontavion Henderson. Their upcoming production “Damn Yankees” will be held April 18 to 28 at the Wadley Campus.
Mindy Reynolds, a social sciences instructor, was master of ceremonies. Beverly Corley, an English teacher and department chair of language arts, was in charge of the table decorations.
Some people purchased and decorated tables themselves. Others bought tables for the event, but they are not interested in decorating. Their tables were decorated by staff who enjoy decorating.
“We have people sign up to decorate the tables,” Beverly says. “We have in-house decorating with the employees and staff. It is a good-hearted contest, but it sets the tone to make it something special for those attending.”
Judges select the best tablescape. There is also a “people’s favorite.” Jars with the number of the table were placed in the back of the room. Every dollar donated counted as a vote. The winner was Health Science’s “40 years of nursing.”
After the luncheon, a fashion show was held. Darlene Earley-Andrews directed the models. Models for the fashion show were students, faculty and staff. Fashion show contributors were Fringe, Studio 3:19, Matilda Irene Designs and Men’s Warehouse.
The luncheon sponsors were Chicken Salad Chick and East Alabama Medical Center. Runway sponsor was Glynn Smith Chevrolet-Buick.
Table sponsors were Alabama Power Company, Circle of Care, Fincher-Coffin Real Estate, Huntington College, John Fuller and Rebecca Hoyt, Newman’s Accounting Service, Opelika Chamber of Commerce, Scott Bridge Company and Senator Randy and Oline Price.
Red Carpet Sponsors were Auburn Chamber of Commerce, Bailey’s BBQ & Catering, City of Opelika, ESG Operations, Inc. and Thrifty Lizard.
The cake auction was held again this year. Four cakes raised $600.
All of the funds raised from the event benefit the Southern Union Scholarship Program. The money goes to local students who might fall outside the conventional scholarships.
Tables were festively decorated for the event by various groups. Entertainment was provided by members of the Performing Arts Department at Southern Union for their upcoming production “Damn Yankees” April 18-28 on the Wadley Campus.