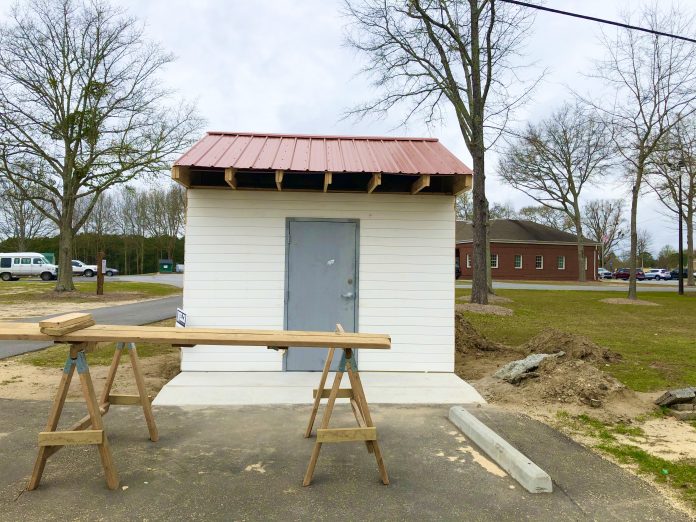 Thanks to a grant provided by the Alabama Historic Commission, a new lavatory is being constructed behind the City of Smiths Station’s Historic Jones Store Museum to accommodate facility guests and visitors, according to Mayor F.L. “Bubba” Copeland.
This structure is part of Copeland’s push to turn the Smiths Station Government Center into a venue for hosting events.
“The (lavatory) will have a toilet and urinal, sink and hand dryer. It will be open when City Hall opens and closes when City Hall closes and Saturdays when the (museum) is open,” Copeland said. “This, along with other future developments in the works, is all part of our plan to make this complex a place people want to come visit and hang out.”
Later in the meeting, the council authorized Copeland to enter into a real estate contract to help improve access in and out of the Smiths Station Sports Complex. Unable to delve into specifics because of ongoing negotiations, Copeland said this purchase will alleviate major traffic issues park visitors face during the week.
“I’ve heard from some of the parents whose kids play in sports leagues that play on Tuesday and Thursday nights that it’s taking them a half hour or more to leave the park. This land purchase will create another path for people to take when coming to or leaving,” Copeland said.
Place 4 Council Member Richard Cooley informed the council before their dismissal about a planned POW/MIA Remembrance Ceremony scheduled to take place at the March 24 meeting in observance of “National Vietnam War Veterans Day” on March 29.
“We want to honor those who have died and those that are still listed as MIA. I, along with the two other veterans on our council (Morris Jackson and Dick Key) to help me conduct the ceremony,” Cooley said. “We invite any area veterans to attend also.”
In other business, the council: