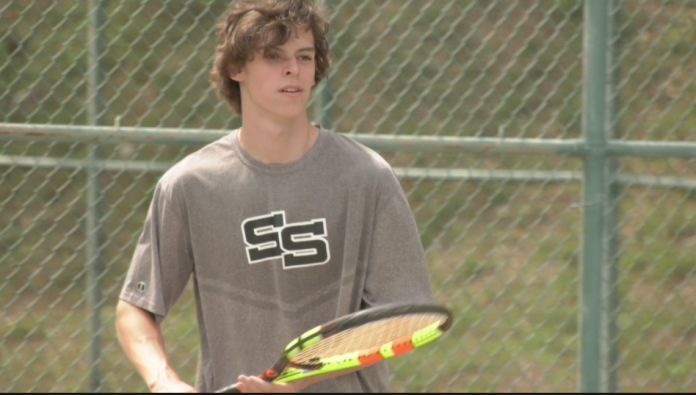 Jake Robinson of Smiths Station was one of four AHSAA 7A student-athletes to receive the coveted Bryant-Jordan Achievement Scholarship last week, which is worth $3,000 and is given to individuals who “achieve beyond his/her ability both academically and athletically or who may have overcome some obstacle or hardship to achieve success.”
In an interview with WLTZ last week, Robinson said he discovered his passion for the sport of tennis in the eighth grade.
“It was just always fun playing doubles with (my father). That’s the big thing I remember, and having him there at every match, just standing on the fence watching me play was good knowing he was there supporting me,” Robinson said.
A senior, Robinson is involved in a number of student organizations at Smiths Station. He holds a 4.33 GPA and made a 34 on his ACT.
After high school, Robinson said he plans to major in engineering at either Auburn or Vanderbilt universities.
Like all other spring sports, tennis has been canceled, thus ending Robinson’s season and career with the Panthers. However, he said later in his interview that he would keep pushing ahead in life in honor of his father, who passed away nearly two years ago.
“I think it would mean the world to him to see that kept going on in life and achieving different things, even though he’s not here to see it with me. Keep moving on, doing different challenges and doing the best that I can with everything.”
To view a full list of other winners, visit www.ahsaa.com.