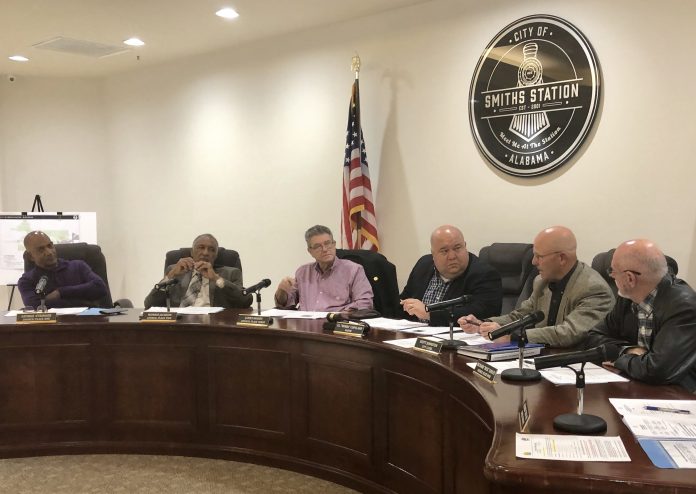 All parks and athletic facilities within the Smiths Station city limits will be tobacco-free after an ordinance passed by the Smiths Station City Council during their meeting last Tuesday.
Those guilty of violating the ordinance will be asked to dispose or refrain from using their tobacco products on first offense. Continued violation will result in being asked to leave the park or facility.
“Before, there was smoking and tobacco use allowed in designated areas, which has resulted in problems and is the reason behind drawing up and passing this ordinance. I hate that is has come to this, but it has gotten out of control,” said Mayor F.L. “Bubba” Copeland.
The council also heard and approved a request for a special-use permit for modifications to Verizon equipment on an existing cell-phone tower at 31 Grace Road from David Andrews of the Center for Municipal Services.
“They will remove six antennas from their part of the tower, two from each sector, and replace them with new ones. This will be a capacity upgrade,” Andrews said.
In other business, the council:
• approved minutes from the Oct. 22 meeting
• approved a rescheduling of the Dec. 24 regular meeting to Dec. 23
• held a first reading for changes to the city’s business license ordinance. The council will be able to vote on this ordinance at their next meeting on Nov. 24.
The Smiths Station City Council meet on the second and fourth Tuesday of each month, with a work session beginning at 5:30 p.m. E.S.T. and regular meeting at 6 p.m. E.S.T. Their meetings are held in the council chambers of the Smiths Station Government Center which is located at 2336 Lee Road 430. For more information, visit smithsstational.gov or call 334-297-8771.