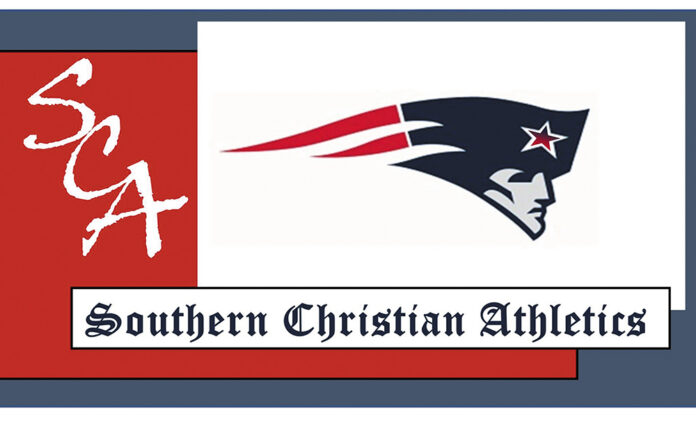 Both the varsity and junior varsity Southern Christian Patriot football teams were on the losing end of a conference battle against Ezekiel Academy on Friday.

The varsity, limited to just 13 players at kickoff, fought valiantly, but could not hold off last year’s state runner-ups, losing 40-6.

The Patriots were paced offensively by junior Levi Marchio, who rushed for 85 yards, passed for 13 yards, returned two kickoffs for 84 yards and caught a pass for 19 yards. Marchio was responsible for the only Patriot touchdown of the game — a 53-yard scamper around the left end in the second quarter.

Besides the lone Marchio score, offense was a struggle for Southern Christian. Senior quarterback Daniel Adams was held to just 31 yards passing, however, he was a factor in the run game, registering 55 yards on the ground. Other offensive contributors include: sophomore Josiah Frick, who had two carries and two receptions for 12 yards; freshman Noah Freeman, who caught one ball for 7 yards.

Defensively, Marchio also led the way with seven tackles. Sophomore Joshua Adams followed him with five and Frick finished behind him with four. Senior Daniel Freeman had two tackles (one for loss) and a QB hurry. In a silver lining of sorts, Adams had an effective day punting, flipping the field multiple times with an average kick distance of 41.5 yards.

Things looked to be going better for much of the game in the matchup for the junior varsity Patriots. A defensive battle, the teams remained deadlocked at zero after three quarters. The Patriot’s had kept Ezekiel at bay for most of the game with consistent commitment to their own run game and a disruptive defensive line.

Defensively, Elijah Bailey had a team-high five tackles; Tripp Vaughn and Lawton Curran had four; River Nelson had an interception; Brandon Williams, Levi Banks and Eliot French had two apiece; and Vaughn and Jedd Scott both registered a pass deflection.

Halfway through the fourth quarter, Jagger Scott found the end zone for the only Patriot touchdown of the game. He led the way for his team with 97 rushing yards; Curran had 58 to back him up.

After a missed extra point, leading the game 6-0 late in the fourth quarter, Southern Christian needed one more stop. Ezekiel moved the ball down the field swiftly and finally found its breakthrough, scoring — and adding the extra point — to go up 7-6 with just 30 seconds remaining in the game.

The Patriot’s last-ditched attempt to get the ball into field goal range ended on the 31-yard line as time expired on the drive.

“We have been in every ball game we have played this year,” said coach Billie Watts. “No one has just lined up and drove the ball down the field on us. Not including our seventh and eighth grade game against Evangel, we scored 112 points to our opponents 80 and had more total yards on offense in every game. This team will be a great team one day when they learn how to play a complete game. When they figure this out, they will be unstoppable.”

The loss for the junior varsity Patriots concludes their season with a 2-5 record, according to MaxPreps. The varsity squad will close out its season this Friday at Lafayette Christian in LaGrange, Georgia.