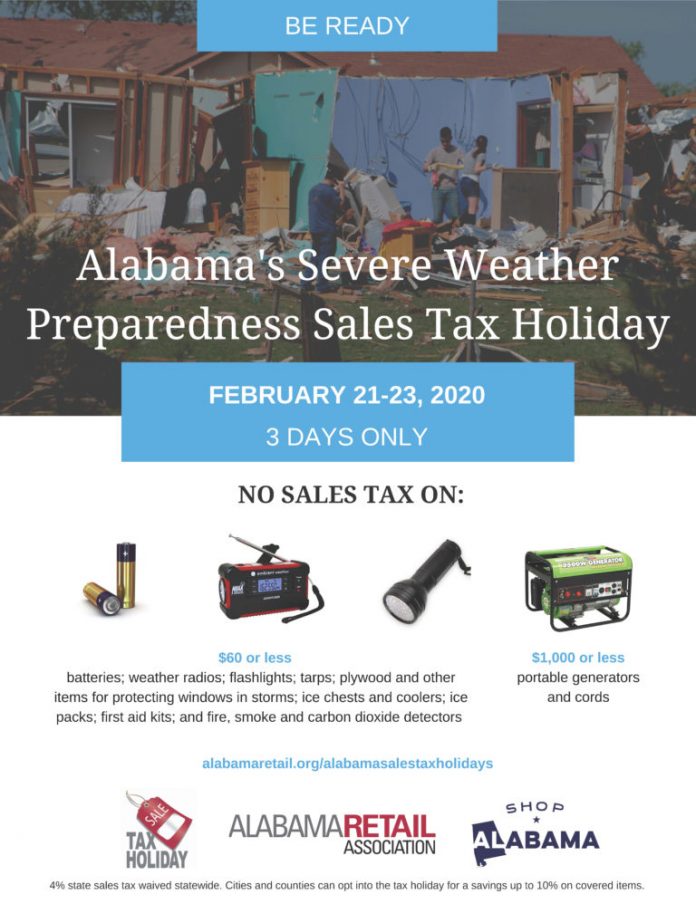 From Feb. 21 to Feb. 23, Alabama will observe the state’s ninth annual Severe Weather Preparedness Sales Tax Holiday. The Alabama Retail Association encourages Alabamians to restock emergency supplies in homes, workplaces and vehicles during this three-day tax holiday. Certain emergency preparedness items will be exempt from the state’s 4% state sales tax, and in some cities and counties, local taxes are waived on those items as well. The tax holiday means shoppers can save as much as 10% on these items in some areas of the state.
From 12:01 a.m. Feb. 21 to midnight Feb. 23, the tax-exempt items include the following priced at $60 or less:
-Flashlights,
lanterns
-Battery-powered or hand-crank radio
-Batteries
-First-aid kits
-Cell phone charger
-Two-way radios
-Manual can
openers
-Tarps and plastic sheeting
-Duct tape
-Fire extinguishers
-Tie-down kits, bungee cords or rope
Other tax-free items include: coolers, ice packs, plywood, window film and smoke/fire/carbon monoxide detectors. Portable generators and power cords costing $1,000 or less are also tax free. For a full list of tax-free items, go to the severe weather preparedness sales tax holiday page at alabamaretail.org.
Alabama is one of three states with a severe weather preparedness sales tax holiday in 2020; the other states with similar holidays are Texas and Virginia.
“Severe weather can occur at any time, in any season,” said Alabama Retail President Rick Brown. “The tax holiday helps Alabama consumers remember to stock and prepare emergency kits to be ready when storms strike.”
Local hardware stores such as Greenville Hardware are among the Alabama retailers stocked with emergency preparedness items for the tax holiday, Greenville Hardware owner James H. Dunklin IV, great-grandson of the founder, recommends stocking up on emergency supplies while the items are tax free.
“The largest month we’ve ever had in the history of the store since I’ve owned it” came after the 100 mph winds of Hurricane Ivan ripped through Greenville in September 2004, said Dunklin, who has owned the downtown store since 2003. “We are only two hours from the Gulf,” so when a major hurricane comes through, “it’s pretty bad here,” he said.
Alabama Retail recommends having enough supplies in emergency kits to last 72 hours following a disaster. For information on what items to include in emergency kits, as well as steps to take before and after disasters, visit ready.gov.