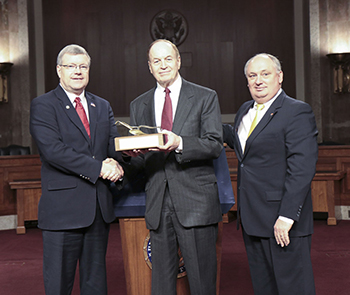 U.S. Sen. Richard Shelby, R-Alabama, received the American Farm Bureau Federation’s (AFBF) Golden Plow Award last week in Washington, D.C. It is the highest honor the organization gives to sitting members of Congress.
The presentation was made before 150 farmers attending the Alabama Farmers Federation’s (AFF) biennial Washington Legislative Conference. AFF is the state’s largest farm organization and an AFBF member.
“Sen. Shelby is a champion for agriculture and consistently stands by policies that support and protect farmers and ranchers,” said AFBF Vice President Scott VanderWal, who made the presentation. “His leadership was key to passage of the Bipartisan Budget Act last year. The legislation provided much-needed disaster relief for farmers, made seed cotton eligible for farm support programs and laid the groundwork for improvements to dairy risk management. Farm Bureau is grateful for his continued service to agriculture and rural America.”
AFBF’s Golden Plow Award recognizes members of Congress who exemplify agricultural leadership and support of Farm Bureau policies. Recipients are chosen for their philosophy or record that demonstrates a commitment to sound agricultural policies supported by Farm Bureau, the private enterprise system, fiscal conservatism and reduced federal regulation of businesses and individuals.
Shelby said he was honored to receive the award.
“I have been truly blessed,” Shelby said, recalling the numerous committees he has served on in the Senate. “I have tried to address a lot of things that affect your everyday life. What you do is important. Agriculture is important, and I never forget that.”
AFF President Jimmy Parnell praised Shelby’s leadership.
“Senator Shelby is a friend of farmers and rural America,” Parnell said. “We are fortunate to have an advocate for agriculture serving as chairman of the Senate Appropriations Committee. Senator Shelby has earned the respect of his colleagues in Congress, which gives him the opportunity to be an influential leader not only for Alabama but also for farmers across the country.”
Shelby was honored in 2003 with AFF’s Service To Agriculture Award — the organization’s honor.
He was first elected to the Senate in 1986 and is serving his sixth term. In addition to serving as chairman of the Senate Committee on Appropriations, he is a senior member on the Banking, Housing and Urban Affairs Committee and the Committee on Rules and Administration. He also serves on the Committee on Environment and Public Works.
Before his election in the U.S. Senate, he served four terms in the U.S. House of Representatives and eight years in the Alabama Legislature. He is a fifth-generation Alabamian and a graduate of the University of Alabama’s undergraduate and law programs.
Started in 1988, past Golden Plow winners include U.S. Senators John Barrasso, Wyoming, 2016; Charles Grassley, Iowa, 1990 and 1997; James Inhofe, Oklahoma, 2009; Mitch McConnell, Kentucky, 2004; Jerry Moran, Kansas, 2004; Rob Portman, Ohio, 2017; Pat Roberts, Kansas, 1988 and 1996; and John Thune, South Dakota, 2015.
House members who have been honored are U.S. Reps. Kevin Brady, Texas, 2016; Frank D. Lucas, Oklahoma, 2012; Collin Peterson, Minnesota, 2006; John Shimkus, Illinois, 2010; and Glenn Thompson, Pennsylvania, 2013.