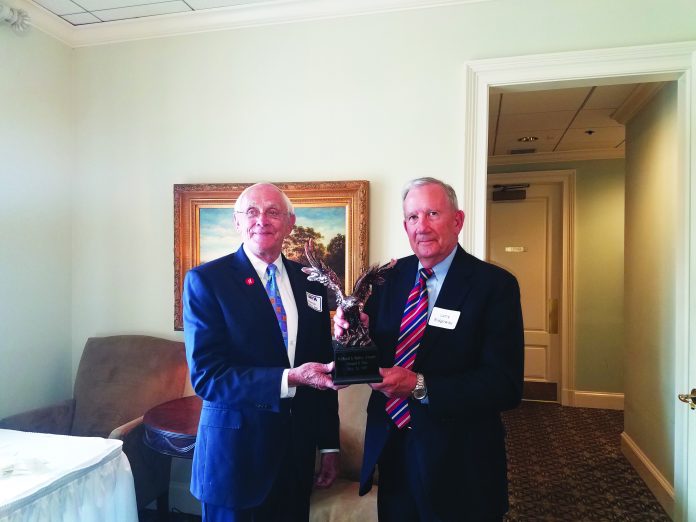 Last Thursday, the Auburn University Retirees Association (AURA) honored Sen. Gerald O. Dial as the 2018 Recipient of the Wilford S. Bailey Award.
The award was established 15 years ago as a way of honoring and remembering the work that Bailey undertook to help protect the AU Retirees retirement plan when the university decided to transfer the University retirement plan to the state educators retirement plan in 1994. Bailey served as president of Auburn University from 1983-84, was a professor and also was the founder of AURA. Each year,the AURA organization selects an individual or organization for their contributions to the society and welfare of retirees from the educational community, and whose character reflects the ideals and standards exemplified by Dr. Bailey.
Dr. Gerald Johnson of AURA introduced Dial, and he quoted Josh Moon from an article published in the Alabama Political Reporter on Dial’s work for public education.
“Over the course of the last several years, the pro-public education lawmakers in the Alabama House and Senate have dwindled to a pathetic few. We have had a difficult 10 years. Through it all, few have stood in the way of the leadership’s shameful attempt to get their hands on public school’s pot of money. Gerald Dial has. If not for Dial and his experience, standing and influence, Lord knows how much money would have been grabbed from the education trust fund during the last few years because of the general fund crisis. It was Dial who blocked the effort to take hundreds of millions from the education trust fund on multiple occasions. It was Dial who squashed efforts to combine the general fund and the education trust fund budgets, which would have made it easier to use the education trust fund dollars to support the general fund.”
“Specifically over the last three years, Senator Dial has worked to get through the legislature some kind of recognition for education retirees and to protect our health insurance program and our retirement program,” Johnson said.
Dial spoke on his background in education. When he was born his dad told him ,“you’re going to get an education.”
It was his dad’s insistence on getting an education that led him to get his degree. “We understood early on how much education meant, and we applied that,” Dial said. “We were committed.” Dial credited a lot of people for his success in the Alabama legislature. “Every time I get to feeling good about something I’ve done, a bill I’ve passed, I remember that I did not get there by myself. A lot of people helped me,” Dial said.
“Education is and continues to be the wheel that turns the economy in this state and makes a difference. I am so grateful for this award. This is the most humbling award that I have ever received. Receiving this award almost made me breathless, speechless.”