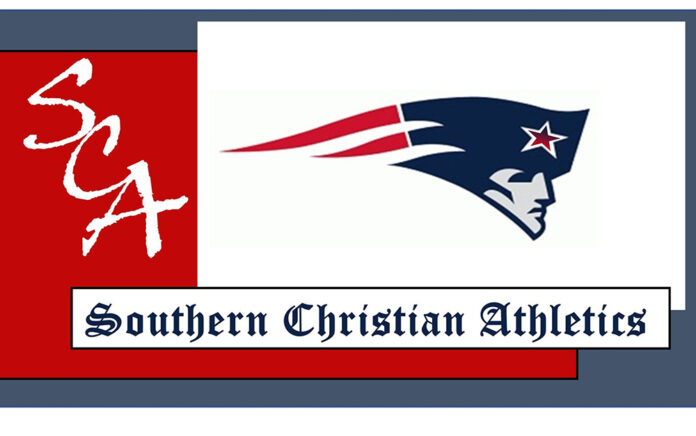 By Maddie Joiner
For the Opelika Observer

Parents in red Patriots shirts filled the stands of Moore Stadium while the Southern Christian Athletics’ JV football team took the field for their inter-squad jamboree.

The jamboree marked the end of spring practice before summer workouts begin. The scrimmage was an inter-squad game of 8v8 with all players playing both sides of the ball.

Southern Christian Athletics (SCA) is a homeschool athletic program that serves the Lee County area, but any homeschool student can join. SCA also has players who attend private schools and do not have access to a team through their school.

“The goal for us is we want to provide sports opportunities for kids that don’t have them,” Jason Scott, SCA Athletic Director said. “We want to make sure these kids got somewhere to play, whatever the sport is.”

The night focused on the JV team, as they did not have enough players for a varsity scrimmage. But Scott found a way for the varsity boys to be involved in the fun: coaching.

“They were very excited about stepping up to help coach, getting out there and coaching these kids,” Scott said.

The varsity team also participated in a punt, pass and kick competition at halftime and Daniel Adams won the overall competition with James Middleton winning both the kicking and the punting events and Josiah Frick winning the passing event.

The team will take a few weeks off before kicking off summer workouts in preparation for the fall season.

SCA Football already has eight varsity games and four JV games scheduled for the fall and is looking to add a few more.

Scott created SCA when he realized his two youngest twins, Jagger and Jedd, had nowhere to play sports.

“We just weren’t comfortable with the options available, so we were praying about it and trying to figure out what we’re going to do,” Scott said. “People just kept asking us over and over and over ‘Why don’t you just do it yourself?’ and I thought, that’s probably a good idea.”

While SCA is just athletics now, Scott sees a school in their future.

“We’re happy to do the athletics and we’ll do that till the cows come home, but I think one day eventually, that opportunity is going to present itself for us,” Scott said.

Currently, SCA offers football and volleyball in the fall, basketball in the winter, softball in the spring and they hope to add a baseball team and tennis team as well.

If any homeschool or private school student is interested in joining a Southern Christian Athletics team, they can email patriots.sca@gmail.com for more information.

Opelika SportsPlex Hosting Summer ‘Paddles at the Plex’ this Weekend