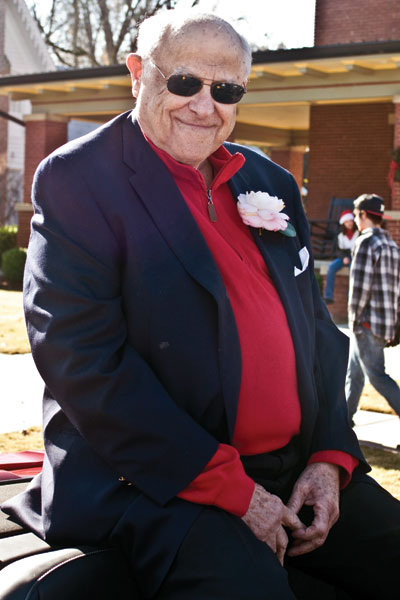 Special to the Opelika Observer
Henry Stern serves as grand marshal for the Opelika Christmas parade in 2012.

Henry Stern might have been born in far-away, Germany but he quickly adopted Opelika as his beloved home. No one ever loved Opelika more and few ever knew more about Opelika’s history. He was East Alabama’s last living holocaust survivor and regularly met with school classes to help make sure the blot on human history would not be forgotten.

Stern was only 6 years old when he, his parents, his sister Lora, his maternal grandmother and an uncle boarded the last ship Nazi Germany allowed to carry Jews out of Germany. The date was June 16, 1937; the place Hamburg, Germany; and the ship was the SS Washington.

The family left Germany at the urging of Stern’s uncle, Julius Hagedorn, an Opelika businessman, and settled in Opelika under Hagedorn’s sponsorship. Miss Louise (Tollison), probably old Opelika’s most beloved kindergarten teacher, began immediately teaching Lora and Henry English, and they were able to enroll in Opelika public schools in 1938.

Henry graduated from Opelika’s Henry G. Clift High School in 1950, went on to Auburn University and served his country proudly and well in the U.S. Navy. He came back home and married an Opelika girl, Roslyn Brock – his beloved Roslyn. Henry and Roslyn had two children: Virginia Howard (Ginger) Stern and Henry Julius (J.) Stern, Jr., who have both gone on to have very successful careers of their own.

Henry and Roslyn both enriched the Opelika community. Roslyn taught art and heritage education at the Opelika Junior High School for 27 years and served on the Board of Directors of the Alabama State Council on the Arts for a number of years.

Henry went into business (retail sales and real estate development) and, for at least a decade, was co-owner of one of Opelika’s leading men’s wear stores, Hollingsworth, Norman and Stern. Henry then served as director of the Opelika Chamber of Commerce for 11 years as the face of the Opelika business community. Henry also served on numerous area community service organizations and clubs such as the Food Bank of East Alabama and the Opelika Kiwanis Club. Stern was also a charter member of the Opelika Order of Geezers.

He was Grand Marshall of Opelika’s annual Christmas Parade twice. Imagine. He was a recipient of the Spirit of Opelika Award and received a Distinguished Service Award from the Opelika Chamber of Commerce in 2002.

Most have heard of Henry’s long search for Stern relatives. He searched for more than 60 years before finding a cousin, Fred Hertz, from Germany who, in 2004, was living in Durham, NC. Fred and Henry were able to reunite and communicate frequently before Fred’s death several years ago.

Stern devoted a lot of his retirement years to educating people, especially young people, about the holocaust. He wanted today’s children to be able to tell their grandchildren they had met one of the last survivors of the holocaust, that they knew it was real.

He served as a member of the Alabama Holocaust Commission from 2003 until 2009. His story was included in “Darkness Into Life: Alabama Holocaust Survivors Through Photography and Art” and was told in Dan Puckett’s book, In the Shadow of Hitler: Alabama Jews, the Second World War and the Holocaust.

And last, but by no means least, Stern was an proud owner and champion of this newspaper, the “Opelika Observer.” His collection of Opelika stories and photographs have and will continue to enrich our pages and educate as well as entertain our readers.

Everyone will miss his physical presence, but his immense contribution to knowledge of Opelika history will continue.