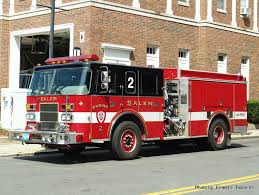 The Salem Volunteer Fire Department (SVFD) has been upgraded from an ISO rating of 9/10 to 5/5x effective Sept. 1. The national Insurance Service Office (ISO) provides this rating to insurance companies to describe an area’s fire protection capabilities, a major factor for most companies in determining the insurance premium charged the homeowner.
This upgrade, which should benefit most homeowners in the Salem VFD district, is a result of many hours of work by the Fire Chief Cecil Rogers, Leigh DeShields, the SVFD “Secretary”, and the other volunteers of the SVFD.
The fire fee increase passed by Lee County voters in 2012 provided some of the funds needed by the SVFD for this upgrade.  SVFD built a new station near Spring Villa on Lee County Road 151 and purchased an additional pumper in 2015.  Two new trucks (a pumper and a tanker) have been ordered and are currently being built for delivery in early 2018.
Because funds are limited, they are carefully managed for the purchase and maintenance of firefighting equipment, and the many supplies needed to provide fire protection services to the community. Oversight is provided by the Board of Directors.
SVFD answers all 911 calls within its district, often arriving at the scene before EMS or the Lee County Sheriff’s Office. These calls include medical emergencies (the greatest number of calls), automobile accidents, and of course fires. The volunteer members of the SVFD undergo continual training largely at their own expense. Although some other county volunteer fire departments have one or two paid employees, at SVFD no one is paid.
Salem draws its water from Beulah, Beauregard, Opelika and Smiths Station. In the some older water service areas the lack of sufficiently spaced fire hydrants hampers the ability of the SVFD to provide the best fire protection to customers in those areas.
A 5x rating indicates that the property is served by a fire department rated “5”, but there is no fire hydrant within 1000 feet and/or the property is more than five miles from a fire station. That doesn’t necessarily mean that SVFD doesn’t adequately provide fire protection to the property. In fact SVFD leaders feel they do. However, ISO rules require the “x” rating.
Homeowners in the Salem VFD district should contact their insurance agent for details about how this ISO rating upgrade will affect them. Several homeowners in the area have indicated possible insurance savings in the neighborhood of 50 percent.
Salem serves about 5,000 households. But it covers one of the two largest geographic areas in the county, extending from Beauregard on the west to Beulah on the east and from the Opelika city limits on the north to Crawford and Smiths Station on the south.  Since Beauregard has a greater population/ SVFD has the lowest population density of any of the county’s five volunteer fire departments. Obviously this raises Salem’s cost of service per property to the highest level in the county.
Largely because of this, the Salem Volunteer Fire Department is asking homeowners who benefit by lower insurance rates from the ISO rating upgrade to consider sharing a portion of their savings with SVFD. One suggestion is 10 to 20 percent of annual savings for a period of 3 or 4 years. Homeowners willing to do this are asked to send their donations to: Salem VFD, PO Box 125, Salem, AL 36874. These contributions will enable further improvements in fire service in the district.