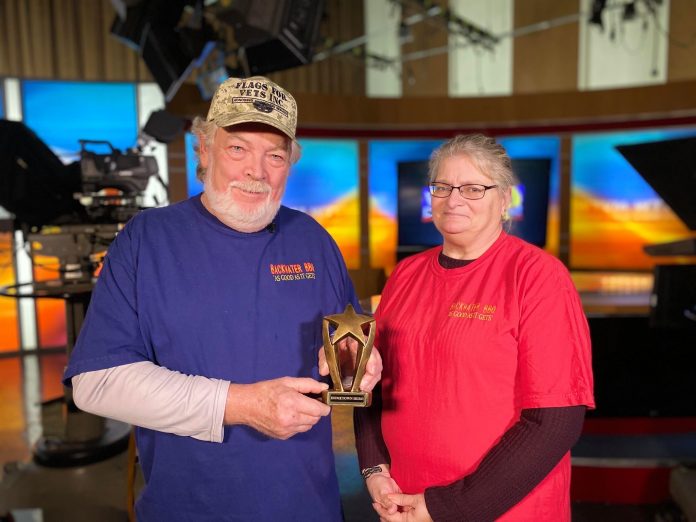 Wayne Wommack and Judy Kempf of Backwater BBQ in Salem were selected as the February “Hometown Heroes of the Month” by Columbus’s ABC affiliate WTVM.
Wayne, an Army veteran, was contacted by the television station last month and invited to a Columbus River Dragons game, where he received word that he and Kempf had been nominated and selected for the recognition. According to WTVM’s website, the award is given to an “everyday person doing extraordinary things in the community.”
The couple uses the restaurant to help give back to the community, particularly local special needs and veterans organizations, often providing steep discounts to those groups of people who are close to their hearts. Following the March 3 tornadoes, they provided meals for volunteers who were assisting in the clean-up and recovery process, which was made possible by donations from Lake Harding residents as well as area churches and schools.
“We just see a need and help where we can. It’s the people on the lake that allow us to do these things (like) providing support and assistance when needed,” Wommack said. “Being a veteran myself and having a special needs brother has shown me the needs and difficulties these people go through every day.”
In a November interview with the Observer, Wommack said he continues to live as a soldier by looking out for his fellow veterans, young and old alike, by maintaining frequent or almost daily contact with some of them to help combat the onset of depression or isolation.
“On average, 22 to 23 veterans die every day. I’ll sometimes call, sometimes text them, and if I don’t get an answer, I’ll go beat on their door because I don’t want them to become part of that statistic,” Wommack said. “Those personal demons are real, and I want to be in that fight with them. And if I can’t, I want them to know that they don’t need to quit and that they shouldn’t feel like giving up.”
As for the award itself, Wommack said he and Kempf are humbled to receive the recognition.
“It is an honor to be associated with HomeTown Heroes, and to be selected. (I) still feel it couldn’t be done without the generous lake people,” Wommack said. “We just honestly run point. We couldn’t do it alone.”
For more information about the award and how to nominate someone, follow WTVM’s social media platforms or visit www.wtvm.com.