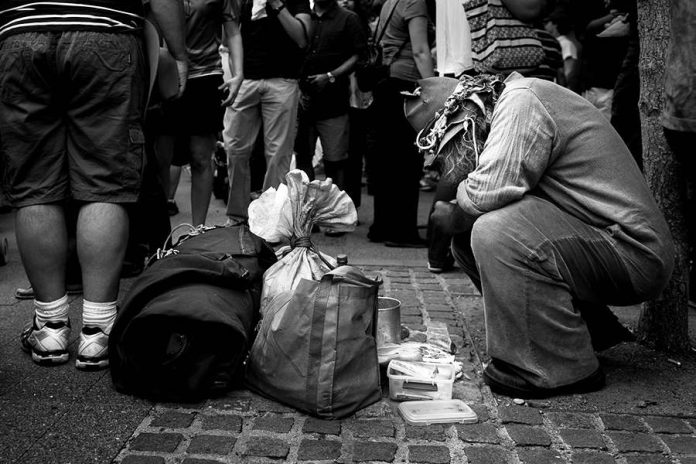 His wife died. It was sudden. One day life was good; the next day he was picking out urns.
They say he gave up living, which is probably why he lost his job, fell behind on rent, and missed his electric bill. They repossessed his storage unit. He got evicted. It was one thing after another.
He was broke—without a pot to you-know-what in. All he had left were two kids, and an urn.
And one Datsun truck covered in rust.
He didn’t like himself. Homelessness will do that to a man. He decided to leave town. He would stay with his uncle in Atlanta to get on his feet again.
The first night on the road was spent at a rundown motel. The next night was spent in the bed of his truck with his kids. He was running out of money fast.
He held the urn while he drove. His kids slept in the seat beside him. And he thought about her. He talked to her sometimes.
He spoke in a whisper, careful not to wake his kids. While talking to her, he noticed his gas tank was on “E.”
He pulled off the highway. He had a few dollars left to his name. On the way to the filling station, something caught his eye.
It was an ancient cemetery, just down a dirt road—the kind with iron fencing, crooked headstones, and live oaks.
He turned into the graveyard. He explored the headstones in the glow of his headlights. He didn’t know why he was there.
And that’s when he saw it.
It was a headstone with his wife’s name on it. Her first and last name. He almost choked. He bent low and inspected it. The dates were different, but it was her name, along with four engraved words:
‘‘Til we meet again.” What are the odds.
The dam broke. He felt something warm inside him. He says it was the same feeling you get from a hug—minus the arms.
Then, blue lights. A police car.
The deputy asked if everything was okay. And because of our hero’s fragile state, he told the deputy all about his late wife.
The officer was kind. He listened. They talked for nearly 30 minutes. They sat on the hood of a Datsun together and overlooked the stone markers of people who left us long ago.
Finally, the deputy said, “Well, I’d better be going. You sure you gonna be okay, sir?”
They shook hands.
“I’ll be fine,” he answered.
Then, the deputy reached into his pocket and said to the man, “Take this, but please don’t tell anyone I gave it to you.”
He handed him two hundred-dollar bills. Then, the deputy crawled into his cruiser and rolled away into the dark.
When he looked at his sleeping kids. He felt the same warm feeling again. He fired up his engine, he drove toward the Shell station across the road to fill his empty tank.
Only, something was different. His gas gauge was no longer on “E,” but on three quarters.
A miracle? Maybe. Maybe not. But there aren’t many differences between broken gas gauges and miracles, if you ask him.
That was a long time ago. He was younger. A lot has changed. Since that night, the world has become a different place. Smartphones have altered the way people live. And most Datsun trucks belong in graveyards. His kids are grown. One child is a structural engineer. The other is finishing school.
And our hero is about to be remarried to a woman who he calls his “gift.” He is happy.
And. In a box in his closet sits an urn he hasn’t emptied yet. Inside the burial vessel are two hundred-dollar bills someone gave him eighteen years ago.
“They’re a reminder,” he says. “A reminder that loved ones ain’t gone, but watching over us.”
‘Til we meet again.
Sean Dietrich is a columnist, and novelist, known for his commentary on life in the American South. His work has appeared in Southern Living, the Tallahassee Democrat, Southern Magazine, Yellowhammer News, the Bitter Southerner, the Mobile Press Register and he has authored seven books.