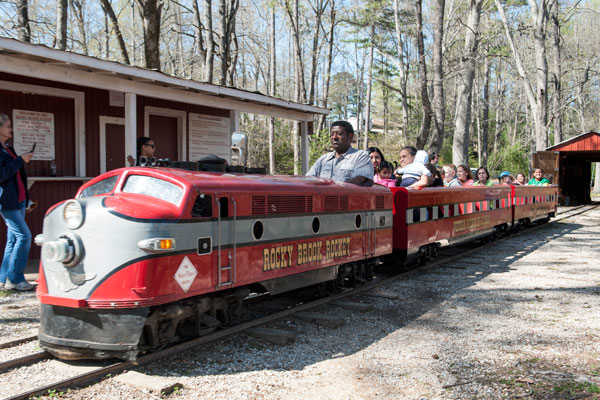 Photo by Robert Noles
The Rocky Brook Rocket has delighted children and adults alike for decades and will continue to do so after a coming restoration returns it to tip-top condition.

There are several landmarks that are as synonymous to Opelika’s history as baseball parks and the Statue of Liberty are to America. Places that parents take their children because it is where their parents took them. However, possibly none is more iconic than the Rocky Brook Rocket at  the Opelika Municipal Park.

This local treasure has been providing family fun to many Opelika residents for decades.  And thanks to its upcoming restoration, the tradition will continue for future generations.

Built by the Miniature Train Company and installed in 1955, the Rocket served as an attraction for families in the city’s first dedicated park. Land was cleared and tracks were laid, thanks to the efforts of city departments and volunteers. From the moment it made its first run on July 1, the Rocky Brook Rocket brought public recreation together in Opelika.

But like any piece of machinery that has a lot of use under its belt, the Rocket began to show its age. The first makeover to the train occurred in 1993 under a project conducted by the Opelika Kiwanis Club. The Rocket remained operational for a time until the parts became difficult to acquire.

In 2007 the train was up and running again as a new engine was installed and other mechanical issues were repaired. Although the train is operational at this time, according to Municipal Area Supervisor Matthew Battles, it is only a matter of time before the Rocket begins experiencing major mechanical problems.

Current issues include damage to the body of the train and engine and brake system inefficiency.

A major challenge to the inevitable project was finding someone who was capable of such a major restoration.  Battles had in mind the perfect individual: Rick Dale of the hit television show American Restorations.

In January Battles emailed photos and information on the Rocket to LeftField Pictures, the producers of the show.

“Within 20 minutes, I received a call back from a lady who worked for LeftField. She said that it was exactly the type of project that Rick and the show would want to highlight,” Battles said.

The current plan is to send the train to Las Vegas by December to begin the full restoration.  The process, which will take 4-6 months, will be recorded and aired on The History Channel.

The cost of the project is estimated around $100,000, for most of which the Department of Parks and Recreation is relying on donations from members in the community.Several individuals and corporations have already pledged their financial support; however, more donations are needed.

Battles pointed out that that is a small amount of money for both the restoration and the recognition Opelika will receive by being featured on national television.

“This is a small amount of money to pay when you consider the publicity Opelika will receive by being on The History Channel,” he said.

In addition to a complete restoration to the Rocket, the project also includes a train depot and shed upgrade and new loading and unloading platforms.

There are several ways in which members of the community can get involved and donate.  Fundraising includes the selling of engraved brick pavers in three different sizes, which will be part of a walking path near the train depot. People can also become “Wall of Fame” contributors.  Order forms for both are located at the Opelika SportsPlex and the Denson Street Recreation Center. Online ordering is also available at www.polarengraving.com/OpelikaParksAndRecreation

Trey Gafford has also designed Rocky Brook Rocket t-shirts, which are for sale at Victory Designs in downtown.

Locals can expect the restored Rocket to be revealed at renovation presentation in June 2015.

“Like an old car, Rick Dale will get the Rocket back to brand new,” said Battles.

Keep checking the “Opelika Observer” for updates on the train’s trip to full restoration.