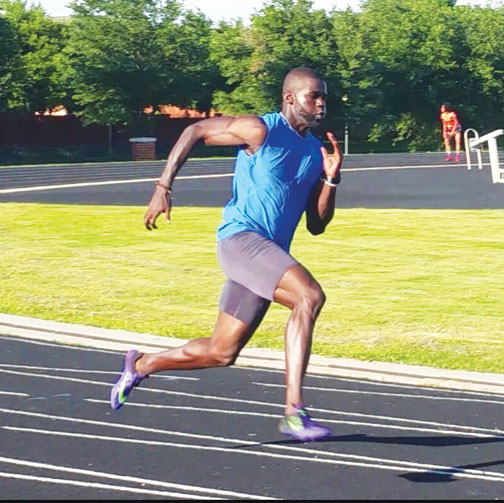 In 1999, Opelika watched as OHS student and track team member Monzavous “Rae” Edwards took first place in the 100-meter dash at the state meet. Seventeen years later, the community will watch him take the biggest stage in athletics as he competes in the 2016 Olympic Games in Rio next month.
“My journey to the Olympics started right here in Opelika at Opelika High School,” Edwards said. Just one year after winning a high school state championship, Edwards qualified for the Olympic trials. Edwards also ran for Bevill State and Nike Central.  He went on to be a part of eight U.S. teams in 13 professional seasons.  He qualified for the trials several times but suffered from injuries that kept him from making the Olympic teams. “Up until now, I’ve had kind of an olympic curse every year of the Olympics,” he said. “Literally, the week before or after trials I have gotten injured and wasn’t able to make it. This time, I focused more on making sure I kept my body in one piece.” Edwards said he has been chasing the “elusive Olympic title” for a while.
Initially, track and field was not his sport of choice. “I didn’t choose running, running chose me. I just knew I was going to be a football star and just used running as a way to train, but I just kept winning and winning,” he said.
A plot twist in Edwards’s story is the team he will represent at the Olympics. This year, the 25.3 miles per hour runner will be competing in the 100-meter dash for Nigeria. His unofficial personal best in the event is 9.69 seconds, and his official best is 9.95. This was made possible through a program called Uplift Nigeria, an effort to rebuild Nigerian athletics by reaching out to citizens of other countries who have Nigerian heritage. In order to switch countries, one cannot be on any team for two years. This worked out perfectly for Edwards in 2012 when he suffered an injury at the trials and in 2013 when he broke his jaw and was unable to compete. In 2014, a representative from Nigeria reached out to Edwards. “I thought, ‘you know what? That would be a cool thing to do to end my career,’” he said. “I wanted to go down in history as an athlete who has been to all the major championships and one of the only ones to say that they have been on national teams for two different countries.” At 35-years-old, one of the oldest athletes to go to the Olympics, Edwards will make history.
Edwards said he is most excited about the opening ceremony because that is the one moment where it feels like the entire world is at peace. He added that it will not feel strange to be representing another team because he knows all of the U.S. athletes, and to him, running is running. “I’m friends with and have raced against everybody on Team U.S.A. It’s just like any other sport. Kevin Durant just got traded to Golden State, and it’s the same thing in our sport,” he said.
Preparation for the 2016 Olympic games began in 2014. “The thing about training for the Olympic games is you have to train your body to peak at a specific time of year,” Edwards said. “You have to eat right, you have to sleep right, be on regimens of when you go to the weight room and when you get body work done. You basically have to treat your body like a NASCAR.” He added that the most difficult aspects of the sport are the injuries and working all year for something that one “has a .000 chance of achieving.” “There are only three spots on the team for an event,” he said.
In regards to growing up in Opelika, Edwards said he had some of the best times of his life. “One of the things I loved most about being here was Friday nights because I played football. Even before football, one of the greatest memories I have of home is being able to feel the spirit of the south throughout the entire city,” Edwards said. “Being from somewhere so small, a lot of stuff that I did was neighborhood oriented. I could walk from one side of the railroad tracks to the other, and people still knew who I was. I used to do a lot of my high school training in neighborhoods around here.”
Edwards is the son of Elton Curtis and Denise Edwards, and he said both of them have been his cheerleaders and encouragers throughout his running career. “My mom always told me ‘can’t never could,’” he said,
Denise said she is trying to book her trip to the games. “This was always destined. I’ll never forget seeing the determination he had when competing in the world games,” she said. “It’s not every day your oldest baby goes to the Olympics, and I wouldn’t miss it for the world.” Monzavous said that, after traveling all over the world, the things he loves most about home is how “close-knit and unified” everyone in Opelika is.
Monzavous currently resides in Dallas, Texas where he works in the I.T. business and  as a personal trainer. He is also a motivational speaker and finds that he can inspire people, not with his successes, but with his failures. “It’s the injuries and the teams I didn’t make that helps me inspire people,” he said.