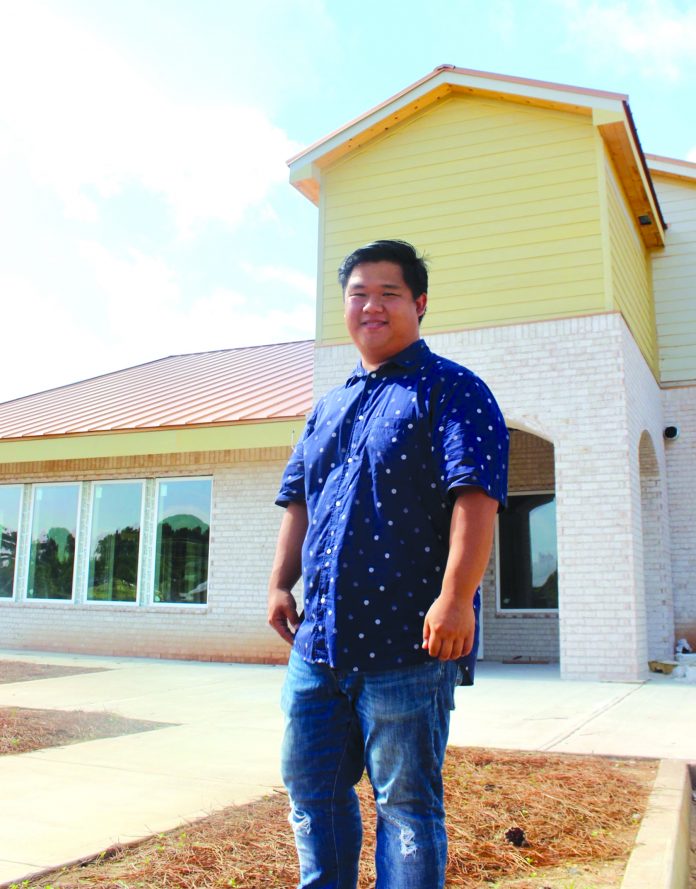 Shop projected to open by the end of August

Instead of the traditional grab-and-go style method currently implemented in most of America’s coffee-shop chains, Johan Jo of Ristretto Lounge wants to create a place where everyday tensions are eased and creativity is allowed to flow.
“Ristretto is typically half of what a regular espresso would normally be – the same amount of coffee but it’s a shorter extraction time and in my opinion, it’s the sweetest part of an espresso. And that’s what I want this place to be, a sweet experience for everyone who comes in,” Jo said.
Construction is nearing completion on the two-story structure that will house Ristretto, located behind the Tiger Square Shopping Center in Opelika at 2650 Corporate Drive. Adorned with a copper-colored roof, Jo said the lounge’s massive double-door entrance, three brightly polished wooden columns and vaulted ceiling are part of his plans to defy and exceed customer’s expectations.
“I want people to be in awe by it. By the looks of it inside and outside, you wouldn’t expect it to be a coffee shop,” Jo said. “Instead of the label of a coffee shop, I really want it to be a ‘coffee hub’ for everybody … and that goes with the architecture, atmosphere, customer service, experience and product that we want to provide here.”
Born in South Korea, Jo and his family moved to Canada for his father’s career when he was seven years old. After four or five years there, they relocated to the Auburn-Opelika area so his father could help start Daewon America, Inc., a successful automotive parts manufacturer.
Upon moving to the area, Jo was enrolled at Lee-Scott Academy, where stayed and ultimated graduated in winter 2012. He is nearing completion of his business degree from Auburn University.
Jo reminisced that owning and operating his own coffee shop began as a teenager on a trip to visit family in South Korea, helping operating espresso machines at his aunt’s barista school. Last year, he returned to his homeland for a little more than two months to learn more about the ins and outs of the coffee business from his aunt and enjoy the little time he had left with his dying grandmother.
“My aunt really nailed me on every single thing. (At the school) there’s a barista course program that usually takes nine months for students to complete, and I did it in two,” Jo said. “I was up by 4 every morning, getting on the train at 5 o’clock, then rushing to another hour-long train ride to get there. As soon as I arrived, I would get my apron on, getting everything ready and dialed in.”
Jo would stay for the rest of the day, working until midnight most nights and taking the last train home, a routine that consumed the majority of his two-month visit to the country. That training, however, would prove to be an invaluable eperience in his journey to opening Ristretto.
With help from his father last summer, Jo secured the lot that will house Ristretto and its parent company, WhiteWave LLC, and construction began last August.
Projected to open by the end of this August, Jo said he has spent the last year fine-tuning his concepts and plans for the shop.
At Ristretto’s center will be a 25-foot-long bar on the ground floor, which will feature seating on either side and an area on one end for customers to interact with their baristas and learn more about the coffee that is being prepared for them. There will be also be a conference room equipped with a whiteboard and television for groups to rent out for presentations or studying.
Other seating will be included on the ground floor along with a covered patio surrounded by bushes and trees to block noise and “create a nice, pleasant atmosphere,” according to Jo.
Behind the building is a large, open area that Jo said that he and his father want to turn into a garden and walking path.
The fruits, herbs and spices raised on the property will be play a prominent role in the baked goods that Ristretto will sell. Jo said that these recipes will combine the simplistic French baking approach and often flourless items found in Japanese baking to create healthier items that will pair strikingly well with the coffee they serve.
Chicago’s Intelligentsia Coffee and Tea will serve as Ristretto’s main provider, a company the prides itself on its “commitment to sourcing, developing, roasting and distributing the world’s finest coffees” according to a post on its website.
Another important part of Ristretto’s mission is to allow people with artistic or creative talents to hone and perfect their craft within the lounge’s confines.
“When people who have those types of minds come in here, I want them to say wow and immediately start picturing things that they want to do, not for the shop but with their creative minds. We want it to be a space where they can collaborate and do something great in this community,” Jo said.
Ristretto’s projected hours of operation are 7 a.m. to 10 or 11 p.m. Monday through Saturday/Sunday and later during finals week for Auburn University and Southern Union students.
For more information or updates on the shop’s opening call/email.