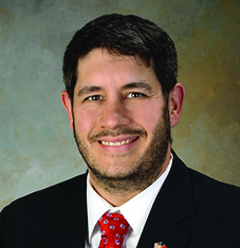 Today, Certified Financial Planner Jericho Wilson from Community Financial Services at AuburnBank enjoys helping people plan their financial futures by expertly navigating them through the volatile waters of the financial market. While Wilson has become a highly respected and successful financial planner in the Auburn-Opelika area, the seeds of his success were first planted far from here, in the hostile desert of Iraq and nurtured to life by the United States Marines.
Wilson, a Phenix City native, joined the United States Marine Corps shortly after graduating Central High School in 1999. For him, joining the military helped alleviate some of the financial burden his mother endured raising him as a single mom, while providing an opportunity to set out in search of “the call” that most who have served seek – purpose.
After completion of basic training at Parris Island, South Carolina, Wilson attended a regiment of follow-on training. First, he attended Marine Corps Combat Training at Camp Lejeune, North Carolina and then Marine Corps Air Ground Combat Training at Twentynine Palms, California. With all of his training behind him, the newly minted Multi-Channel Electrical Technician (MOS 2831) received orders to Okinawa Japan as a member of the 7th Communication Battalion, 3rd Marine Expeditionary Force where he was serving on Sept. 11, 2001. Shortly after the most prolific terrorist attack in America’s history had occurred, Wilson was transferred to Cherry Point, North Carolina as a member of 2nd Marine Air Wing (MWCS 28).
As the storm clouds of war grew darker and louder on the horizon, so did Wilson’s desire to contribute. Like so many at that time, his “purpose” had been clearly defined by Usama Bin Laden and when an opportunity arose to volunteer for duty in the Bin Laden’s backyard, he did not hesitate.
By August 2002, Wilson was firmly entrenched within a security team as a machine gunner in support of Operation Southern Watch. While the majority of his travels and experiences during this time remain classified, he was well aware that his unit, and the others units surrounding him, were planning and training for a large scaled operation.
By the end of February 2003, the invasion of Iraq was imminent and Wilson and the others were highly trained, motivated and more than ready to answer the call when the order was given.
“I thought we were going to catch a plane from where we were down to Kuwait and then drive North with our buddies but I was wrong,” Wilson lamented. “Unfortunately for me, it would be a different set of orders as they told me that I had been in country too long and I had to rotate back to the states” continued Wilson. “I’m one of the only two out of the whole damn company that actually wanted to be here, and now when we’re needed the most, your sending me home!?” He did not like it, but Wilson had his orders and so he went back to North Carolina to watch the operation he had trained so long for unfold on television like everyone else – his purpose unfulfilled.
In June 2004, Wilson once again found himself in somewhat of a dilemma. His five-year contract with the Marines was soon to expire as the news that his unit had received orders to return to duty in the Middle East broke. Wilson opted to return to duty on a six-month extension, this time it was Fallujah, there would be no further service afterwards. “Fallujah was a rough experience” Wilson said., “my total time in the Marine Corps would be five and a half years.”
Now 24 years old, five and a half years removed from high school and seasoned by life beyond his years, Wilson found himself headed back home to attend classes at Auburn University starting the spring semester of 2005. Initially hoping to convert his military training into a career, he initially pursued an electrical engineering degree. Soon however, Wilson would find his true calling in finance completing his undergraduate degree in December 2008.
“During college I had to help supplement my Montgomery GI Bill I was using to pay for books and tuition” Wilson acknowledged, “so I worked building and grounds at Auburn Bank.”
It was there that Wilson met Burt Harris, the founder of Investment Professionals Incorporated.
“I had never met Burt before then but I had already determined that I didn’t want to be a banker, so I asked Bert in December 2007 if I could intern with him during the summer semester 2008. I ended up interning that Summer and then again in the Fall. Somewhere along the way we agreed that I would come on in an assistant capacity until I became a fully licensed advisor in July 2009, I’ve been here ever since.”
Always willing to serve, Wilson gravitated to another service organization, this time the Rotary Club, where the same disciplines he honed in the Marine Corps subsequently led to his election as president of the Rotary from 2018 to 2019. During his tenure, Wilson spearheaded tornado relief efforts, raising over $55 thousand dollars for those affected in Beauregard. Additionally, Wilson continues to assist in a variety of capacities within his community and enjoys meeting other veterans and serving alongside them as well.
For more than 10 years now, Wilson has made it his new mission to help people better themselves and take control their future through financial and investment planning. On April 20, 2013, Wilson focused on his future when he married the former Rebecca Colley, the love of his life.
“She’s the best thing to happen to me. Helping people secure their financial futures, serving my community with Rebecca by my side, my life is full, I’ve learned what my purpose truly is.”
For more information about Community Financial Services, call Wilson at 334-887-9760 or visit him on the web at ameripriseadvisors.com/jericho.wilson/.