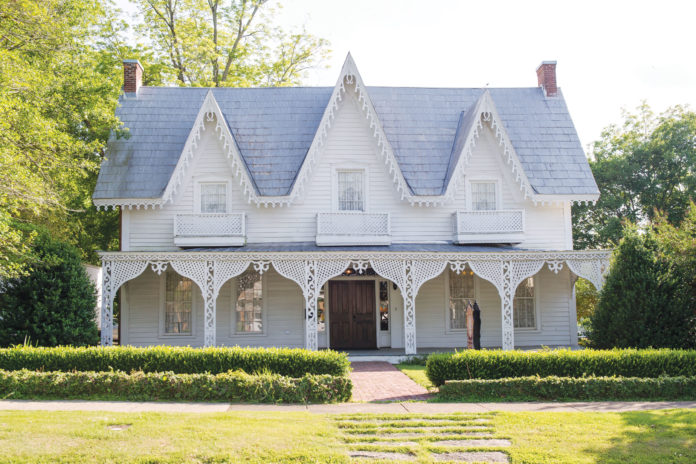 Editor’s Note: Last week we printed the first of a two-part story about Opelika’s Gingerbread House and the people who have lived in it. We left off with the first part of the story of Loxla Edwards, whose son, John Calhoun Edwards, built the Gingerbread House in 1865. We hope you enjoy Part II.
Loxla moved to Opelika in 1867.  His two sons John and Polk had moved there two years earlier, according to Cherry. Loxla traveled between his plantation and town until 1873 when he settled in Opelika.
Loxla was mayor of Opelika for three successive terms, 1875, 1876 and 1877. Cherry wrote, “It is on record to his credit, and the credit of those who elevated him to office, that those three years are among the few years of great peace, quietude and prosperity in the municipal history of the city.”
According to J. Newell Floyd, two of John and Sara Jane’s sons and one son-in-law, Dr. Samuel H. Saul, were veterinarians, graduating from college in Washington, D.C.
The Edwards’ daughter, Lula Victoria, married George Nelson Hodge and lived next door to her parents on South 9th Street. Another daughter, Wilhelmina, and her husband Dr. Saul had a daughter named after her mother who married Samuel Calhoun Bean.
The Bean’s daughter, Miss Sara Lula Bean, was the last to live in the Gingerbread House.
As the house continued to deteriorate, some feared the unique house would be lost. When I asked Miss Bean on that hot July afternoon in 1979 if anyone had wanted to purchase the house to restore it, she said, “No one has wanted to buy it, not in a long time. I couldn’t sell it even if I wanted to; my uncle in Miami and cousin in Montgomery are part owners.” Miss Bean, who was nearly an invalid, said she wasn’t able to move any place else.
Another owner of the house was 1. J. Scott Sr. of Opelika, who owned 20 percent. “My interest in buying it was to have it restored,” said Scott in 1979. “I thought it was one of the most unusual houses, and I think it should be preserved.”
After he learned of the estate situation he was unable to purchase the house. He offered his share of the house free twice to organizations. “It looks like an impossible situation as far as I can see,” continued Scott. “If something isn’t done to preserve it at an early date, it will be beyond repair.”
After Miss Bean passed away, the Carpenter Gothic house was vacant for 25 years before it was purchased by the Opelika Historic Preservation Society  (OHPS).
Peter Weiss, associate professor of the McWhorter School of Building Science at Auburn University and a former president of the OHPS, removed everything rotten and stabilized the house. He enlisted the help of architecture students.
The OHPS sold the house to John Marsh, who put a for-sale sign in the front yard.
In 2006, John Hendricks had been looking for a new location for his Auburn clock shop and museum after losing the lease. Mayor Barbara Patton called Hendricks to see if he would consider an Opelika location and gave him a tour.
When he could not find anything suitable, Hendricks sat in his car on 9th Street near the railroad tracks and realized what was wrong. He said, “Lord, I have been doing this wrong, and I pray that you will find the best location.”
He drove down 9th Street and was getting ready to turn onto Ave. B to return to Auburn. Since there was a long line of cars, he decided to drive through the intersection and found himself in an area he had never been. “I said, ‘Lord where are we going?’”
Then suddenly he saw the Gingerbread House and said, “That is it!” Seeing the house brought back a memory in 1976 when he had seen a photo of the house in the newspaper and was smitten with it. He placed the paper in a bedside table and had forgotten about it.
He talked to John Marsh about buying the house. Marsh would do the restoration. John and Margaret closed on the house in January 2007.
The house had deteriorated so badly there were times Hendricks had his doubts. At the end of November 2007, the Hendricks began displaying 400 antique clocks. The shop and museum opened in June 2008 with no exterior changes.
“It was a challenge and a labor of love,” says Hendricks. “We are glad we did it.”
The Gingerbread House began a new life as the Old Timers and Chimers Clock Shop and Museum.
Now, after 10 years, the Gingerbread House prepares for another chapter, as the Hendricks are ready to retire.  They are in the process of the final inventory.
“I am looking for the right person to be the next owner,” he says. He plans to sell the house and shop. “It has to be someone who will love the house and look after it like we have done.”
The Gingerbread House is listed on the National Register of Historic Places as part of the Geneva Street Historic District. It is also registered as one of three gingerbread houses in America.